With the anxiety of the sacrificial anode still fizzing on the prop shaft and no way to troubleshoot the problem, our aim was to get to Turkey as quickly as possible. If we didn’t discover why and fix the issue, and it was a DC leak, then it was a possibility that we could lose the propeller and prop shaft due to galvanic corrosion created by different metals in close proximity to each other within the saline ‘battery’ of the sea. We have a Gori folding propeller on A B Sea and to replace that would cost upwards of USD 5,000. And that would blow our sailing budget right out of the water.

We immediately headed for Samos as we knew there was a chandlers there where Barry hoped to buy several replacement anodes that would get us to Turkey where we would be able to find a boat electrician at competitive prices.

The four hour passage to our anchorage of choice at Chios was fairly bouncy with 20-25kts (T) of wind aft of our beam, with 2-3 metre waves. As we approached the middle of three bays at Salagona bay the wind increased to 27kts, but once we were deeper in the bay it calmed nicely and we dropped anchor in 5 metres of sand with 30 metres of chain.

After a good night’s sleep (although despite the calm anchorage, I’m sure Baz’s mind was buzzing), we woke early and set sail for an expected long eleven hour passage to Pythagorio on the southern side of Samos Island.

The sky was clear blue, the sea was like glass as there was no wind at all in the bay. As we headed out in normal drive, our apparent wind speed was 12.9kts on our port aft beam and so we brought out the headsail, reefed. The waves in the open water were long and low.

By 10am the wind dropped to 6.7kts (apparent) which just isn’t enough to keep A B Sea moving so we brought the sail in and continued in normal drive, getting 6.7 - 7.7kts SOG. A couple of times (it must have been the GPS) our SOG read 9.5 and also 14kts which, with no current, is impossible for a yacht of our type and size!

The waves were quite bouncy along the western side of Samos, but as we rounded the south west corner of the island with true wind up to 30kts behind us (App. 22kts) it was more of a pleasant ride and we averaged a steady 7.4kts SOG.

We anchored in Pythagorio, in 5m of sand with 20m of chain out at 4pm which made it only a ten hour trip, so not bad going really! It was lovely and calm in the anchorage and we were glad to be back in this familiar spot.

While we were waiting for the right wind conditions to head for Turkey, I felt inspired to finally wrap my last two precious Persian (Neyshabur) Turquoise cabochons. I used 925 Sterling Silver wire and two completely different settings for each piece of turquoise, and I love how they turned out. I will be putting them up for sale on my shop for anyone who is interested in purchasing this special stone.

Which setting do you prefer?

We’d only been anchored in Pythagorio for a short while when we received an email from Ross and Laura from Holly Blue who were tied up at the inside harbour with their two boys Josh and Noah. They also have a YouTube channel called Sailing Holly Blue and I love their filming and editing style.

We had a couple of beers with them and they invited us out in their hire car to visit Potami Waterfalls on the north west of the island.

We had a great day out with them. The walk to the falls was absolutely magical through charming woodlands, crossing over rustic wooden bridges and mini falls as water tumbled over the larger rocks in the stream. Along the way the path led us by Panagia Potamou - Church of the Transfiguration - the most well preserved late Byzantine church on Samos island. Recent studies indicate the church probably dates back to the 11th century. A part of it still functions as a church with beautiful Greek religious iconography hanging on simple white walls. Other parts are in ruins and marvellously integrated with the landscape giving quite a mystical feel.

We arrived at a pool where several tourists sat on stones that lined the sandy area. It seemed the actual waterfall could only be reached via the pool, through the stream-filled rocky crevice. Hmm. Baz and I had forgotten to pack our bathers which I regretted as I would have loved to have cooled down in the pool. Ross, Laura and the boys however, had been more organised and all four of them made the journey to the first of three waterfalls. Josh swam while Laura and Ross, with Noah on his shoulders, walked in chest deep water to the falls. Here's a slideshow of some of the day: 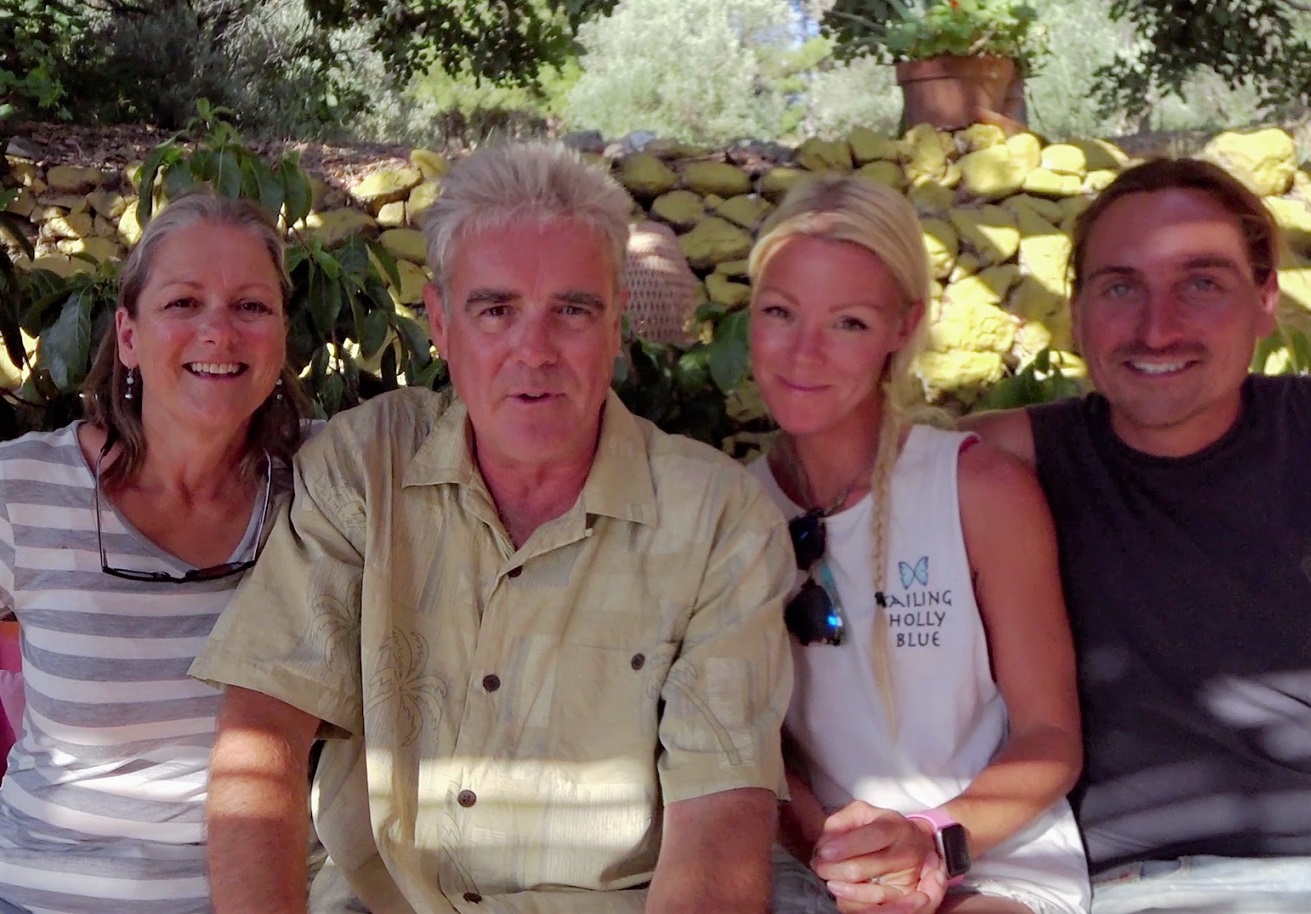 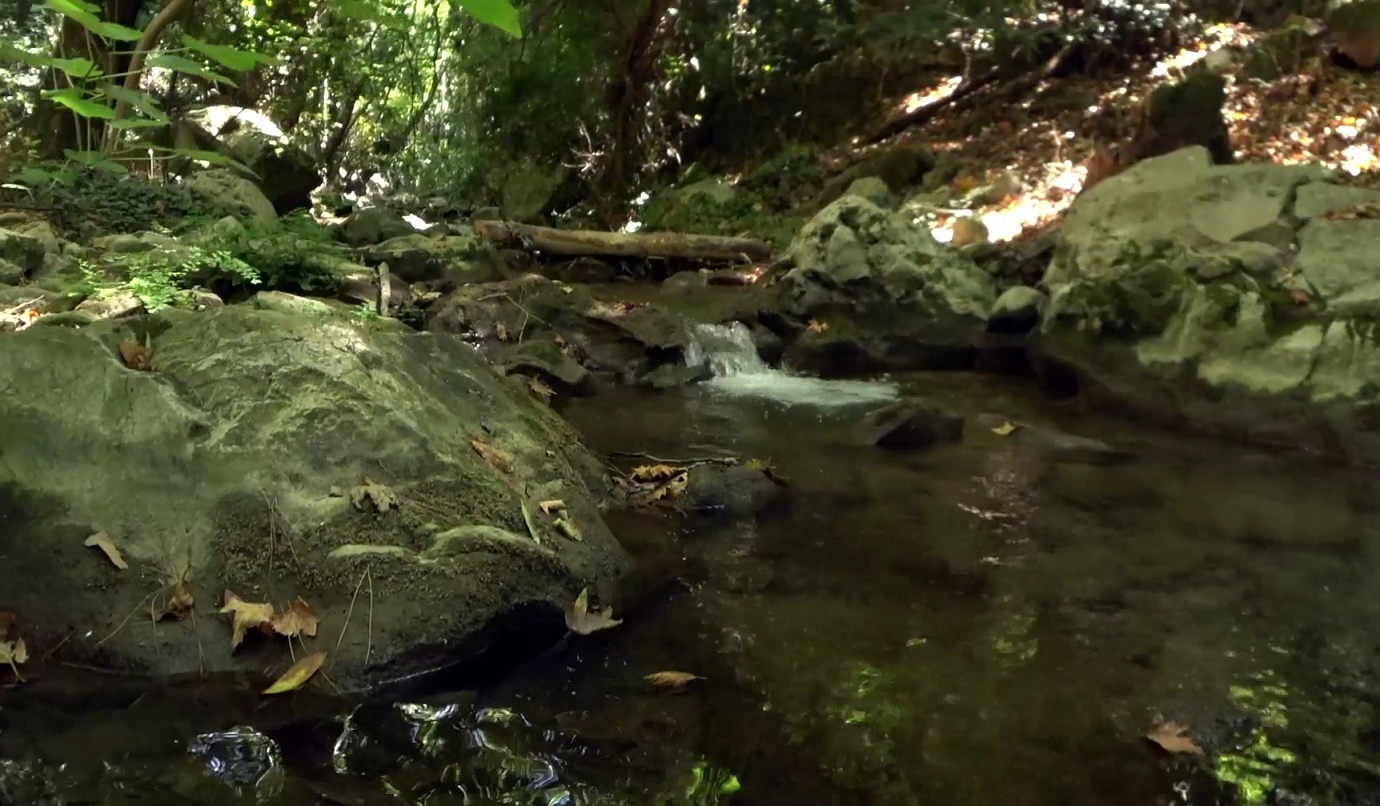 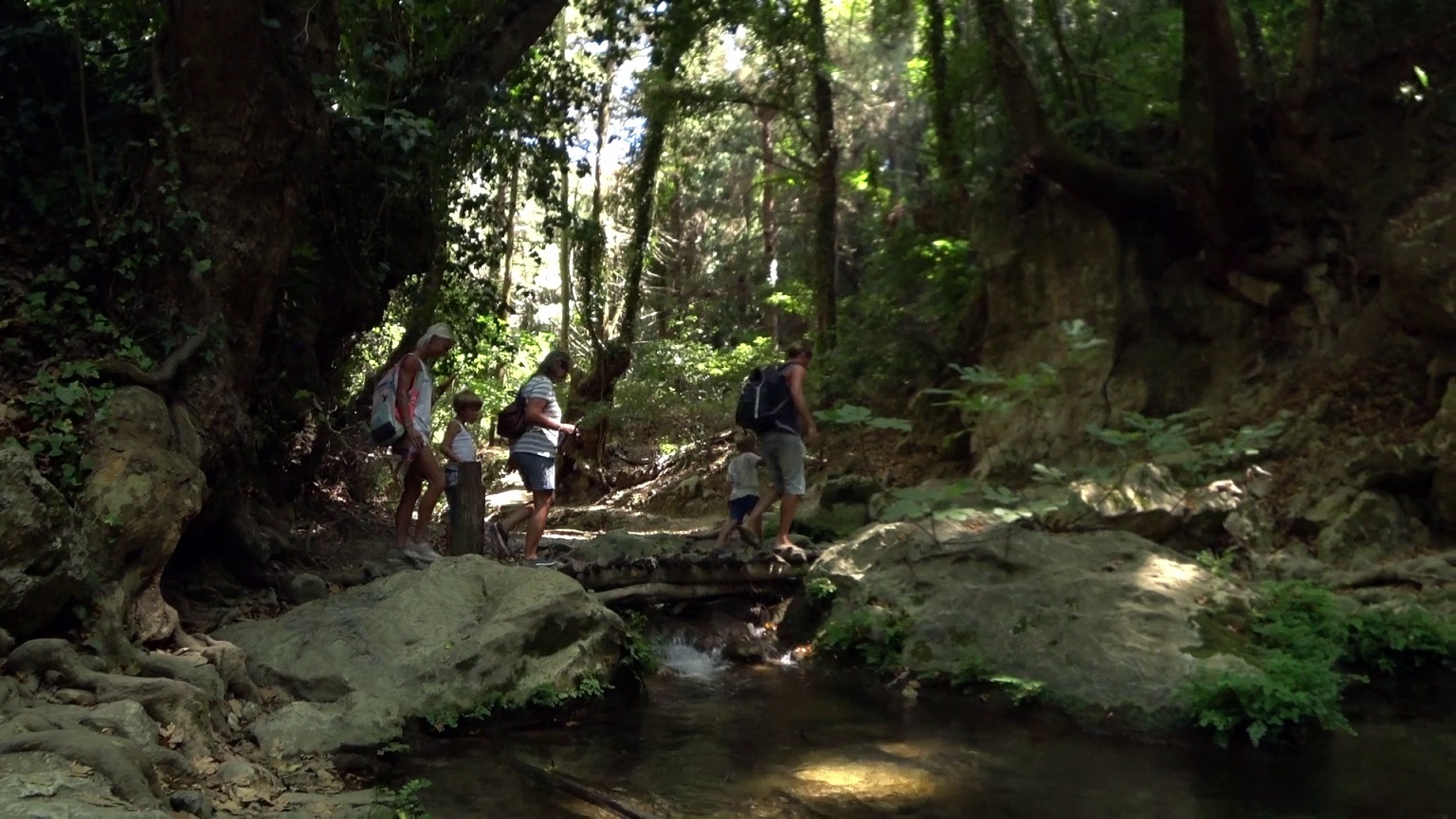 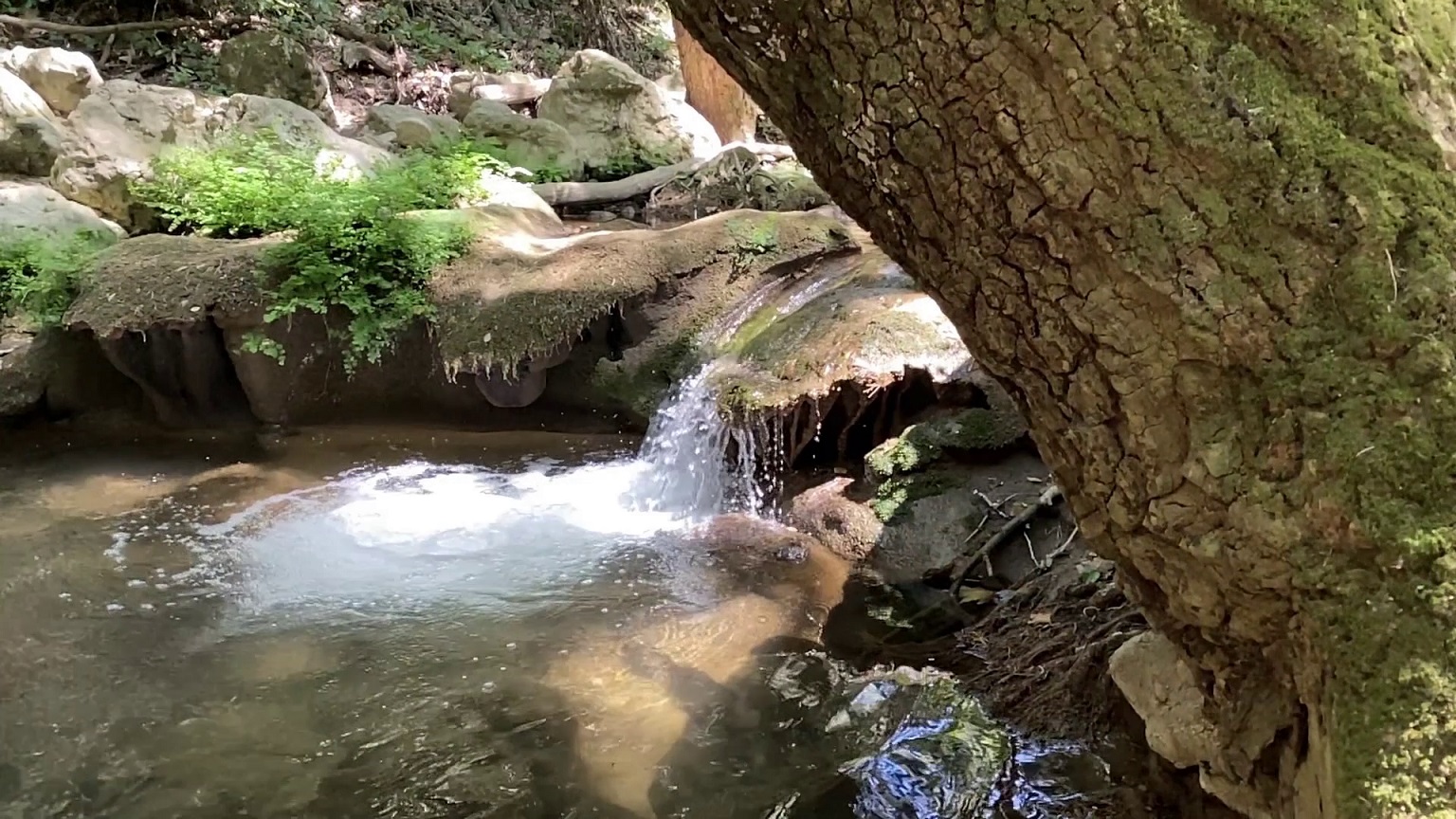 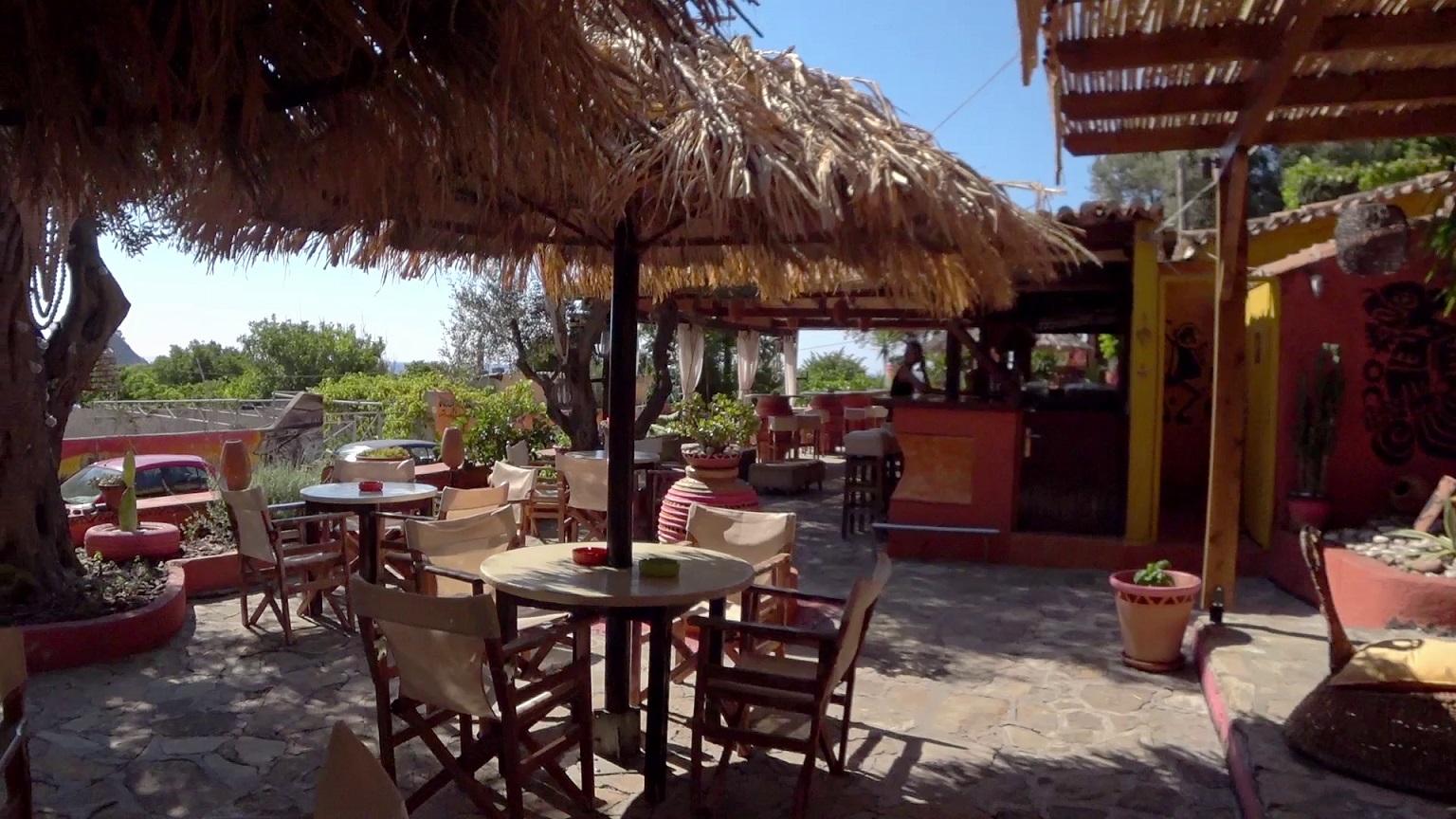 Baz and I made do with paddling in the water while we waited. Baz did try and get some video footage of them by climbing up some rickety wooden steps that lead to a restaurant, but unfortunately the treetops blocked the view. A short time later Holly Blue crew returned and we headed back down the path to the road where we stopped at a charmingly colourful bar for a well-deserved drink, before heading back to Samos for a gyros dinner.

We thoroughly enjoyed our time with Laura, Ross and the boys. Laura is also a fitness coach and you can see from the photos that she practises what she preaches. If you’d like to check out their channel and support them by subscribing, just follow this link.

Before we left Greece, Baz replaced the anode on the prop shaft with one he’d purchased at the chandlers in Pythagorio. And guess what? This one didn’t fizz!! We weren’t sure why, but we were happy to see this change, although we were curious to discover what had changed that had made the difference.

With a break in the Meltemi, Baz and I checked out of Greece on Thursday the 23rd of July with concerned warnings from each department (Port Police, Customs and Immigration) that once we entered Turkish waters we wouldn’t be allowed back into Greece with the covid restrictions in place. “It’s okay,” we smiled.

11.25am on a clear and sunny morning we upped anchor and set out on a pleasant five hour passage towards Didim in Turkey. With a fluctuating with speed on our port beam, we brought out both sails, reefed and enjoyed a proper sail with the engine off.

At 11.55am we crossed into Turkish waters and exchanged the Greek courtesy flag with two flags: Turkish and the yellow Q – Quarantine flag.

After battling with 30kt winds in the bay beside D-Marin marina at around 3.30pm, we managed to quickly drop anchor and then release the dinghy from the davits. We brought it around to the side and tied it to the midship cleat so we would be able to deploy our passerelle once we moored in the marina.

With great assistance from the marineros, we docked safely stern to using a lazy line and stern lines.

Atilla our agent was waiting for us with a doctor ready to come aboard and take our temperatures. We’d given Atilla all of our information a couple of days earlier so he’d arranged check in to Turkey. Once the doctor had pointed his thermometer at each of us and had read our temps, we were given the all clear. I have to say I had a momentary panic when he shook his head at my first temperature reading, and took it a second time. But my worry that I had a high temp was unfounded; my temperature was actually a low 36 degrees Celcius!

We had to stay on board while Atilla took our documents to his office and finalised our paperwork, but once he returned, we were free to go “somewhere, somewhere, somewhere”. Perfect! Many thanks to Hugh and Claudia from SV MairMade for facilitating our check in.

Jim, our first Patron and buddy boating friend sailed up the Turkish coast to meet us at the marina with his son Matt. That evening, Jim invited us to a Patron’s Welcome Dinner and we had a marvellous time at the Yacht Club in the marina, with excellent food and wine and much merriment.

Until next week when we show you around the marina, bring on board a couple of tech guys and begin our journey further south east along the Turkish coast, I wish you a very pleasant week, taking action to bring your dreams to life.