Baz and I visited Poros on our way from Spain to Turkey last year and while we only stayed there overnight, what we saw of Poros town left an impression on me. So when the anchorage at Kavouri on the Greek mainland became untenable due to high winds putting us on a lee shore (again – see last week’s blog), we decided to head south west and revisit Poros.

Staying for a few days in Russian Bay at Poros Island meant we had plenty of time to explore the town. Early one afternoon, we grabbed the shopping list, bags of rubbish and video camera and headed to the town quay. We had a giggle when we noticed that we’d parked in a spot that was marked for mega yachts only. It was the end of part of the jetty that was undergoing renovations, so we didn’t think we’d be in anyone’s way. And our tender qualified as a mega yacht didn’t it?

Walking the extensive length of the quayside which spans the town harbour and right around the west and south side of the town towards the channel that runs between Poros Island and the mainland gave us an opportunity to admire the colourful and varied architecture. There were plenty of yachts moored along the quay, quite a few being charter yachts. Poros is a busy town and the island is frequented by both charter yachts which call it home, and also travellers sailing to and from the Corinth Canal which lies 35nm north of the island. As it was later in the season, the town was relatively quiet which we appreciated.

We headed up one of the back streets and climbed up the steps along the narrow roads, passing traditional Greek houses along the way. Bougainvillea and other vibrant plants trailing over the walls added bright bursts of colour and the houses provided a welcome shade from the sun which was still hot despite it being October. We glimpsed a great view of the harbour as we walked and finally returned to the other end of the quay, by the ferry terminal. Walking along the quayside path we passed a large children’s playground, the village fountain with dancing water, and stopped at one of the tavernas before looking for a supermarket, which the oracle in me felt would be close by.

Sitting at a quayside table we watched yachts attempt to moor stern to as new charter boat holidaymakers were taught the ropes. Then I took advantage of the free wifi to make a call to our son Luke in Australia. We had a great conversation over a beer, a wine and some complementary crisps and nuts. 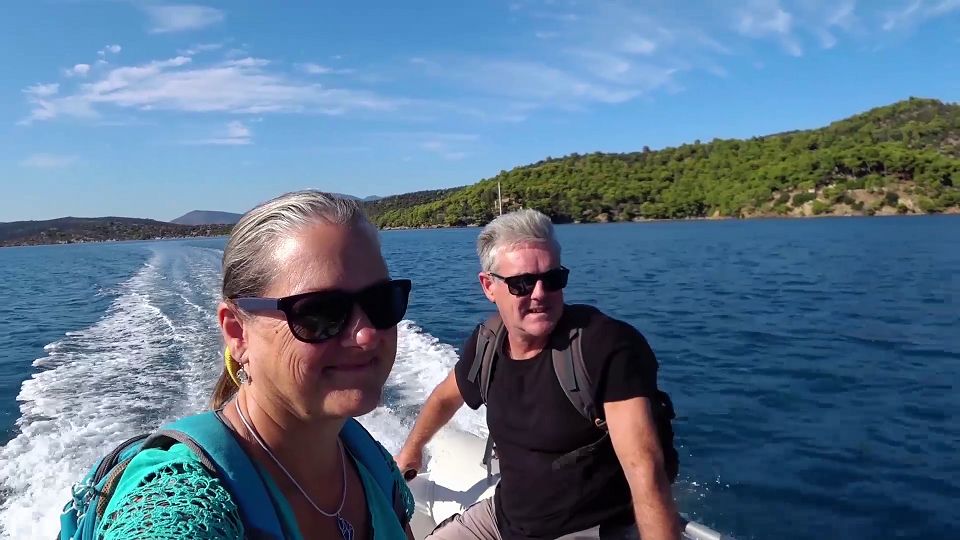 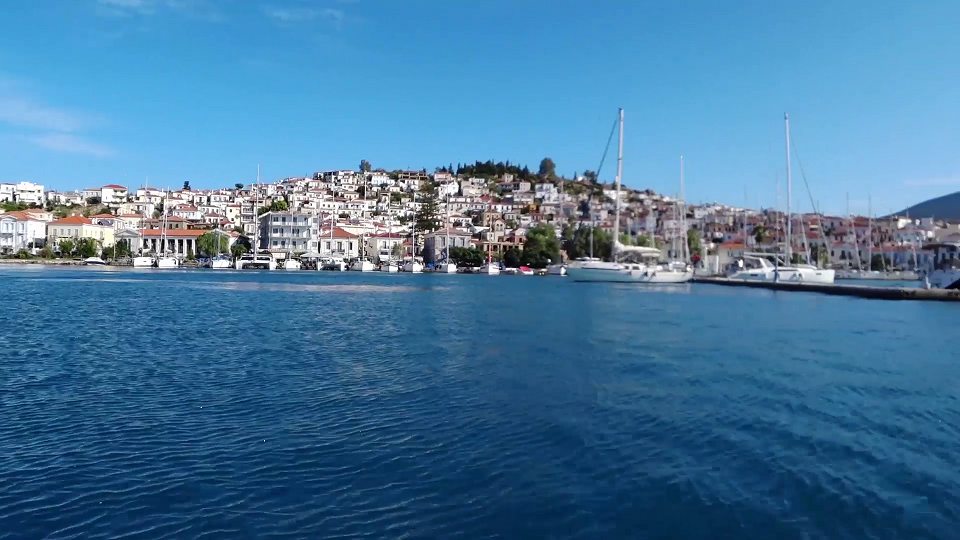 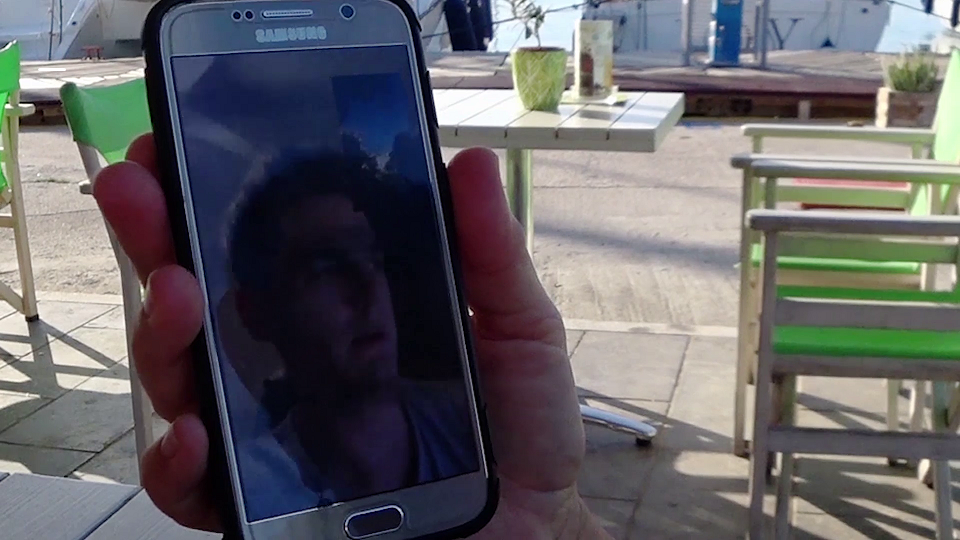 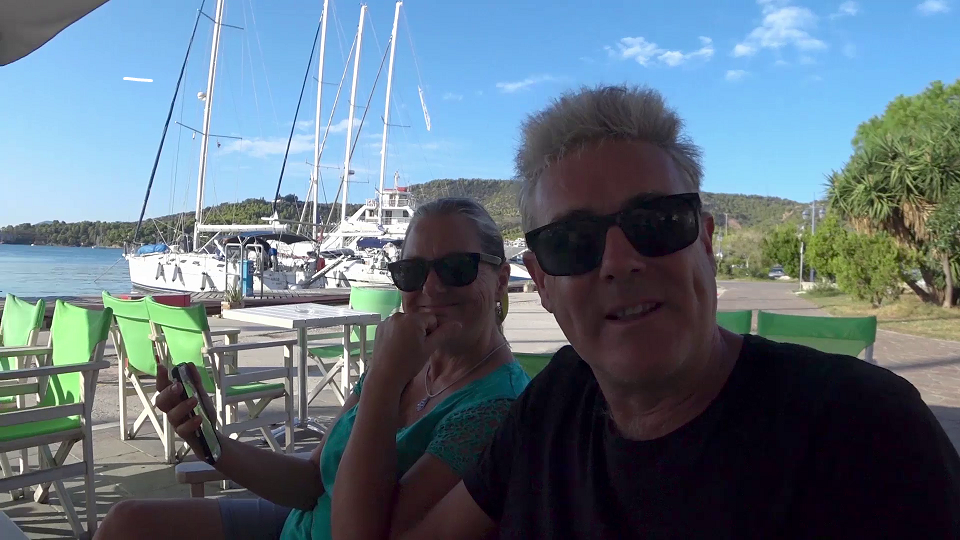 The supermarket was just a stone’s throw from the taverna and we ticked most things off our shopping list. When I asked where the laundry liquid was, because this shop seemed to only sell food (including a reasonable range of fresh fruit and vegies), the shopkeeper told us there was another supermarket a few shops down that sold those items.

Back to the future

Skipping from October in Poros in real time (nearly the end of November), I’m sitting typing this in a little studio apartment in Livaditis Boat Yard which is 2Km north of Limni town on Evia Island in Greece. I’m also sporting a big black plastic moon boot because on our travels from Poros to Limni I managed to injure my ankle and foot, sustaining a small fracture and nasty ligament damage. The doctor reckons I should wear the moon boot for at least 4 weeks. Clever me. The things that happen when you’re not paying 100% attention on a sail boat.

Livaditis boat yard is family owned and run and is providing us with everything we need while A B Sea is on the hard for the winter. During this time we’re going to do some extensive work to her including re-wiring, overhauling the engine, reinstalling the autopilot and giving her a new coat of antifoul. Among other things. Baz has a list as long as our journey from Turkey to Greece. Some of the minor things can be done at the moment, but there are some jobs that we’ll have to wait to begin until I’ve got more mobility with my foot. At the moment I’m hobbling around under the doctor’s instructions of little walking and lots of resting. In the meantime though, I’m able to turn my attention to making jewellery as well as editing. So my days are filled with creativity and the occasional slow walk to the beach which is 200m from our apartment.

If you’re interested in more information about the boat yard, Baz has gone into a fair amount of detail on his blog #106 and you can also visit Livaditis boat yard’s website.

One of the bonuses of being here is that it is a very sheltered spot. We’ve been watching nasty storms via Windy.com hitting the west coast of the mainland (on the Ionian side) and the east coast of Evia (the Sporades side) and all we’ve experienced have been winds no higher than 25 knots. When the wind does blow in this area, it mainly comes from the south, so there is more warmth to it than we’d experience from northerlies at this time of year.

With all of my creativity, I’ve got lots of boho-chic pieces of beach jewellery made and I’ve uploaded them onto our website (Mermaid’s Treasures Store) and also my Facebook page store (Aannsha’s Jewellery). Do email me at absea@healingtruth.com.au if you have any questions.

While I’m on the subject of presents, if you’d like to read our story in detail, along with 8 other sailors, check out “Dream On!” which our journalist friend Jens Brambusch wrote and we helped to translate from German to English. As it says on the cover, “Ten sailors, five continents, one harbour. They meet by chance in Turkey. And tell their own personal stories of their escape from the rat race.”

It’s an inspiring read and “As different as we are in our views, no matter how rich our lives are, whether prosperous or about to go bankrupt, planned or haphazard, entrepreneur or digital nomad, we all have one thing in common: living our dream. We live on a sailing ship.” We feel honoured to have our story featured in the book. “Dream On!” is available in English and German and in paperback and kindle forms.

If you feel inspired to order something from me, you’ll be supporting Baz and me, and also receiving a one of a kind piece, which will make a unique Christmas present. Thank you!

Back to Poros and it was time to leave the beautiful Russian Bay situated close to the tiny island of Daskalio and the little Church of the Dormition of the Virgin Mary, which performs baptisms and weddings in its picture postcard surroundings.

We lifted the dinghy onto the davits which was way easier in the calm water around Poros than it had been in Kavouli a few days earlier! Then we headed back out of the northern channel of Poros Island and east to Sounion bay. We had to motor as there was little to no wind and we were having an uneventful sail. Until we were about 12nm from our destination. At which point, the engine suddenly slowed and A B Sea’s speed dropped by 0.7 of a knot.

Was it something caught around our prop? Or an engine issue?

Baz did some logical troubleshooting and after seeing black smoke in the exhaust, came to the conclusion that the issue was with the exhaust elbow which apparently is prone to getting clogged with soot. Again for a more technical explanation of this, head on over to Barry’s blog #106. Running the engine on high revs for a while seemed to help and the speed increased again, but we were then on tenterhooks for the rest of our passage.

How did we go? Did we get there without incident? I’ll let you know next week.

You can see all of this in the video that accompanies this blog. Just click here 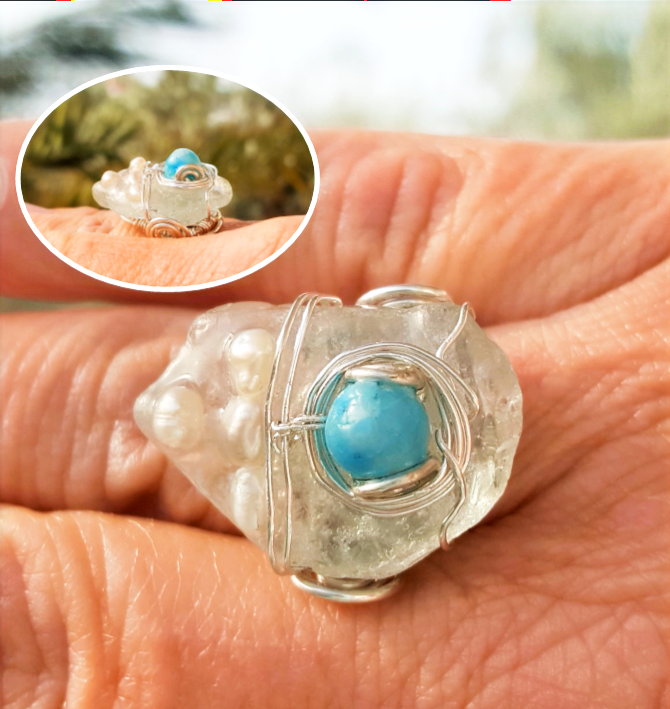