This is blog #100 that's a milestone because it's a nice round number. It also means that despite some of the challenges we've had getting Internet connection, I've managed to successfully bring you a blog every Friday on schedule for almost 2 years. I might celebrate with an extra ration of rum! Or beer.

After waiting out the Meltemi wind for 4 days at the Greek island of Kythnos we finally had a window of opportunity to make a run for mainland Greece and by 08.15 on Sunday 8th September 2019 we had the anchor up and were looking forward to the 5 hour trip that would get us to the bay at Sounion.

As usual there was a mixed bag of wind and at one point in the journey we had 15 knots that allowed us to have both sails out which powered us along at a respectable 5.2 knots of speed. Of course the good wind didn't last too long and we had to use the motor to get us the last half hour to our anchorage.

The bay at Sounion is very popular for several reasons. For charter yachts from the Athens area heading out on their holiday it is the perfect distance for a first day of sailing (or motoring). Conversely when the charter yachts are returning it's also a good final overnight stop before they return to Athens at the end of their holiday.

As an anchorage it has lots of space, good holding, is mostly protected from the prevailing wind but it can get a bit rolly as bow wave swells come into the bay from passing ships and ferries.

The big draw card for Sounion is however the magnificent temple to Poseidon which sits high atop the hillside at one end of the bay. As yachties we had to go there and make a gift offering to the god of the sea (also the god of earthquakes and horses). But that wasn't going to happen this time around and would have to wait until our next visit to the bay.

To make our budget stretch further we stay away from marinas and town quays where there are fees to tie up. With that in mind we invested heavily in our anchor which is what we rely on to keep A B Sea safely in one spot under most weather conditions.

Our anchor is let down or hauled up by the windlass which lives in the locker at the bow, that's its only job in life and it does it very well. What the windlass is not designed to do is keep hold of the anchor chain once we've settled into our anchor spot. Rough bouncy waves combined with the 9.6 tonnes (dry weight) of A B Sea could potentially rip the windlass out of the deck and that would be a disaster.

Once the anchor is down, is set and we have the right amount of anchor chain out, the next piece of front end kit comes into play. It's called a snubber and you can see Aannsha making one in a bonus video episode 'How to splice rope to make a snubber'.

One end of the snubber attaches to a bow cleat and the other end hooks onto the anchor chain, which is then let out a bit more until there is no chain tension on the windlass and the weight of A B Sea at anchor is fully supported by the snubber line attached to the bow cleat.

In one of our episodes we filmed the snubber in action underwater attached to the anchor chain and a few of our viewers expressed their concern that the stainless steel snap hook attachment was a weak link and we should be using a proper chain hook. Even though that was the system we'd been using for almost 2 years without any problems we didn't want to take the chance of the snap hook failing us at the worst possible moment. So a mission was born to go to a marine chandler in Athens that was an authorised Mantus Marine Products dealership and purchase a very well respected Mantus chain hook. 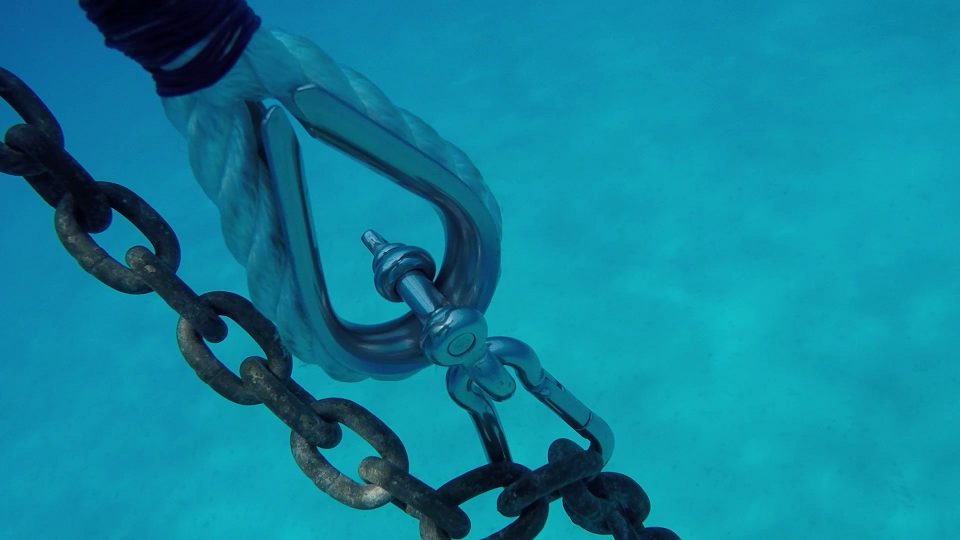 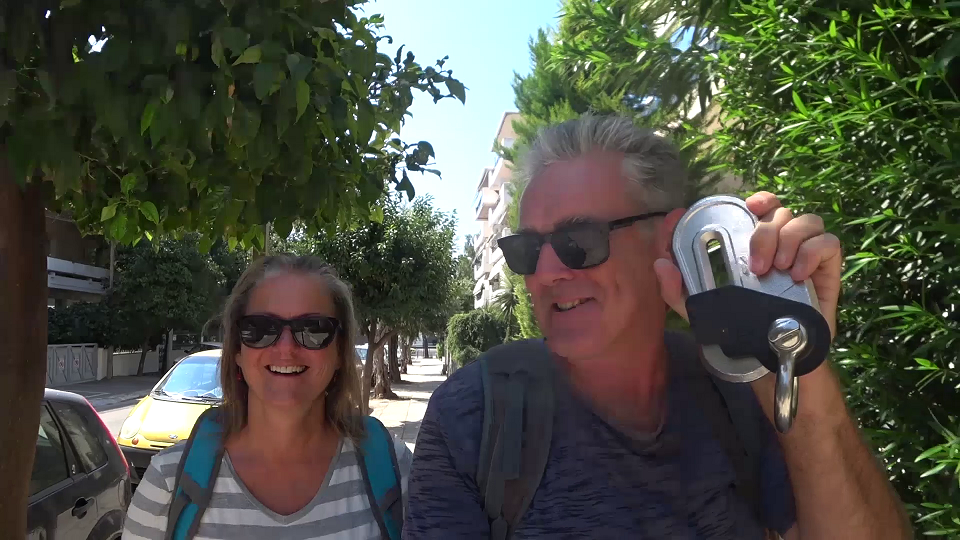 Further stretching our budget we use public transport whenever possible and we'd figured out a bus and tram combo that would get us to the chandler and then on to visit the world famous Parthenon in the centre of Athens. But first we needed to move A B Sea slightly further north to Varkiza Bay.

Varkiza was just a short 3 hour hop from Sounion and we managed to do a little bit of sailing until the wind changed direction and came straight at us from the north. Time to do some more motoring.

Arriving in the big bay the wind instantly decided to blow from the west at 20 knots but the anchor went in first time and we had good holding on the sandy bottom.

After a couple of days to settle in and make sure that A B Sea was not likely to go walkabout if the wind changed we went ashore to catch the No 122 bus that would take us to Glyfada and then change to the tram that would take us close to the chandler.

It was just after lunch when we got to the chandler and even though we were also going to visit the Parthenon we couldn't resist checking out the whole store, all three floors. We're both like kids in a candy store when it comes to marine chandlers but we did manage to resist buying too many shiny objects.

The 10mm Mantus chain hook was in stock and for the quality of manufacturing and the peace of mind it would bring us, we had no hesitation in paying the price tag of 113 Euros (AU$184).

Finally we were off to see the Parthenon perched high above Athens on the Acropolis. A 15 minute walk to the tram stop, a 30 minute tram ride and a final 20 minute walk to the Acropolis itself and there it was in all its splendor. There are two choices for tickets; a 20 Euro (AU$32.50) one which lets you look all around the Acropolis and Parthenon or a 30 Euro (AU$48.80) which lets you also visit several other ancient sites scattered around the city over a five day period. We only had enough time to see the Parthenon so we chose the 20 Euro ticket.

Construction of the Parthenon began in 447 BC at the peak of the Athenian Empire. It was completed in 438 BC, but final finishing touches to the building continued until 432 BC. Its purpose was a temple dedicated to the goddess Athena, who the people of Athens considered their patron.

To the Athenians who built it, the Parthenon and the other Periclean monuments of the Acropolis were seen as a celebration of the Hellenic victory over the Persian invaders and a thanksgiving to the gods for that victory.

In its full glory it would've been an awe inspiring sight to anyone visiting Athens and even today it still has a wow factor. For me that wow factor is the combined skill of the stone masons, the grand idea of the architects, the wonder at the advanced mathematics used in its design and the sheer manpower that went into the construction that makes it so jaw dropping.

We spent a good 3 hours wandering around and admiring everything including the awesome views across the vast sprawling city of Athens. The entrance fee is well worth it and it's also good to know that part of that fee is contributing towards the restoration of the Parthenon. Restoration began in earnest 30 years ago and they reckon they've got another 30 years to go. It's a huge task but worth the effort.

With tired legs and feet we made for the exit and did our public transport return journey back to Varkiza Bay where we clambered back into our dinghy and back on board A B Sea.

We'd spend a total of 8 days anchored there while we edited some more videos, wrote blogs and kept up with all of our social media posts, emails, questions and answers. One of those emails was from a guy called Nikos who'd been following our journey and he lives in Porto Rafti on the east cost of the mainland, a place that we were planning to visit next. We made plans to meet up with Nikos, but that story will have to wait until next week's blog.