Some things require the patience of a saint

The Greek cruising tax has to be paid in advance and must be paid no later than the 3rd day of the month. We paid in advance for our first 3 months when we arrived in Samos and now we were in Milos we needed to pay for the next 3 months. How time flies.

I logged into the TEPAI website where I'd previously registered all of the boat's details and my details hoping that I could either A) simply add the next 3 months to my existing online document or B) at least have the system transfer all the existing details into a new document. Neither of those choices are a possibility. Sigh. So I spent the next 45 minutes digging out various boat papers and filling in all the details again; it's not a very user friendly website.

A few minutes after clicking on the submit button an email arrived, at least that part of the system works okay. After printing out the invoice we went ashore to pay at the only bank in Adamas port and once inside we took a number. #042 said the big red LED display above the head of the single cashier on duty. We were #053.

During our time waiting in the queue I observed one guy walk into the bank with an envelope that was obviously the weekend's cash takings from his business. He took one look at the queue and frowned, then he spotted a friend of his standing at the very front of the queue and walked up to greet him. Now I'm no expert in the Greek language but I am a keen observer of people and body language and it was obvious to me that the business owner was asking the guy to deposit his weekends takings for him when it was his turn at the cashier. After a bit of toing and froing the guy accepted the envelope and the business owner happily exited the bank.

On the other hand there was a Greek Orthodox priest just a few people ahead of me and he was having a muted conversation with an elderly lady behind him. After a few minutes the priest smiled and swapped his ticket with the old lady's ticket so she wouldn't have to stand too long waiting for her turn. That brought a smile to my face.

After a tedious 35 minute wait the big red LED display flashed up #053. I presented the TEPIA paper to the unsmiling lady and also my Visa debit card that's pre-loaded with Euros. She took one look at the paper and the card and said "You can't use the card, you must pay cash."

I replied "Last time I paid I used this card."

She quickly came back with "This summer the rules have changed, only cash."

She was obviously making this up as she was going along because there was no Greek cruising tax last year. So I replied "Well this summer, just 3 months ago I used this card." and showed her the receipt.

I will admit she did think quickly because she immediately retorted "Last time you paid in a post office, this is a bank, only cash."

Growing tired of the conversation because I don't like dealing with officious stupidity, I smiled, said thank you, recovered my papers and card and exited the bank. Now we needed to do two things. A) find an ATM to withdraw some cash. B) find a post office. 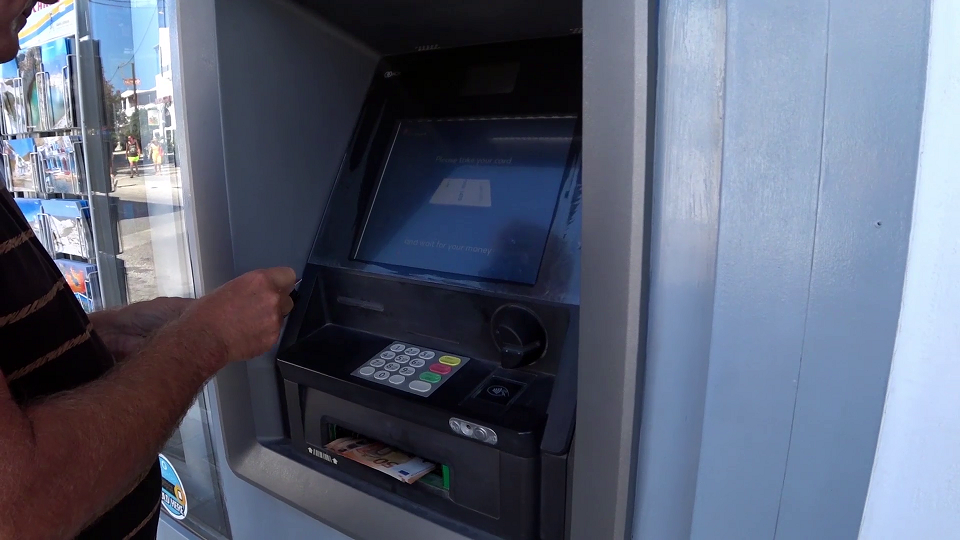 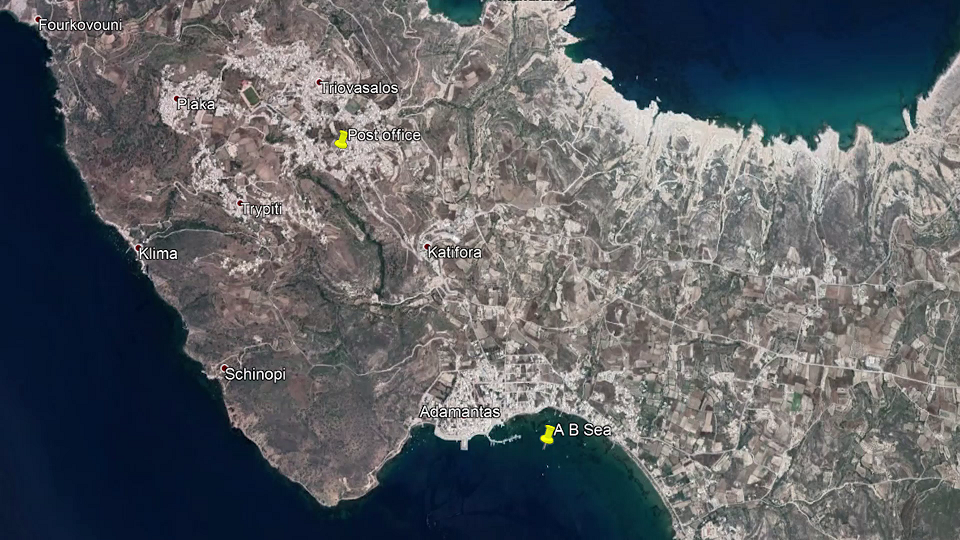 Because we like to have some cash on hand we decided to withdraw 400 Euros (AU$658) from an ATM and take a bus ride to Triovasalos where the post office is situated and try to pay the cruising tax there using the Visa card. But that would have to wait until tomorrow as it was close to midday and we couldn't take the chance of getting to the next town and finding out that the post office was closed, as some businesses do, between midday and 5.00pm.

We grabbed some supplies and went back to A B Sea to relax before we celebrated Aannsha's birthday that evening.

We'd spent some time of the previous week asking for recommendations of where to eat. One restaurant easily stood out from the crowd. Oh Hamos! A family run place that only serves dishes made with fresh ingredients from their farm where they make their own cheese, raise goats, pigs and sheep and grow vegetables.

We don't usually eat out, but it was Aannsha's birthday and we'd had several of our long time subscribers and patrons 'buy us a beer' through the link on the front page of our website, with strict instructions to buy her a slap up meal with a nice bottle of wine. Thank you guys and girls, it's very much appreciated.

We arrived for an early dinner at 6.00pm because we'd heard that you have to queue, sometimes up to an hour, if you arrive any later. And indeed as we sat enjoying our surroundings and meal a queue did slowly begin to form.

Oh Hamos! offers several craft beers from many islands so we tried one of those each with our starter. I can highly recommend the Monday's Pilsner. For our main course I had the piglet and Aannsha had the goat. Just wow. Slow cooked to perfection and simply presented. It's easy to see why this charming little beachside restaurant is said to serve the finest food on Milos island. A bottle of local Sikoinos red wine to wash it down and I was stuffed. Aannsha of course wanted to make the most of it so after a short interlude she ordered a dessert, I ordered an Ouzo.

Just as darkness was falling we clamoured back on board A B Sea, put some chill music on and sat in the cockpit for a few more drinks. It was around midnight when Aannsha decided that skinny dipping was in order and off we went swimming circles around A B Sea in the warm Mediterranean water while a million stars twinkled above. A perfect birthday celebration to remember.

With only 1 day remaining to get the cruising tax paid we were up early and into the port to catch a local bus to Triovasalos. All of the local buses we have travelled on in the islands so far have been modern, clean and air conditioned with very helpful drivers who let you know when to get off. The standard fare for any distance trip seems to be 1.80 Euros (AU$3) per person.

After a very short ride we arrived at Triovasalos and the driver pointed out the post office. The mid morning heat was very noticeable after the air conditioning on the bus.

Walking into the post office the lady behind the counter immediately called us over, I presented the cruising tax document and my Visa card. She entered the details on her computer, showed me the amount to be paid and I entered my PIN. She handed back my card and the document with the receipt attached and less than 5 minutes later we were stepping back out into the sunshine. The difference in attitude, service and courtesy between the bank and the post office were like night and day. Well done Hellenic Post service.

As the bus back to the port was not due for another hour we decided to have a look around the small town. Pretty much everything is situated on the main road so it was just a question of following our noses one way until we figured we'd reached the outskirts, then crossing the road to walk back in the opposite direction.

Now cast your mind back to the 30 Euros (AU$48) of Cosmote Internet credit we'd bought in Lipsi. I tell the full story in my blog #90. As we walked through Triovasalos I spotted a Cosmote logo on the front door of a tech store. We went in hoping to purchase a Cosmote data only sim so that we could finally activate the credit.

With that done, we still had time for a beer before we caught the bus back to the port.

Back at A B Sea the new device was switched on and we were instantly and happily sucking on our 50GB of Internet data. Of course that will be all used up well before the six months expiry date but it does feel good to now have several Internet data sources: 'Wind', 'Cosmote', 'Cosmote What's Up' and the '3 sim' from the UK.

So how did we go with our 30 Euros of credit? The following day, after spending a whole morning chatting on line with the Cosmote help desk, it looked like we were getting nowhere. But after thanking them for trying so hard to help and signing off. I had a thought.

After physically plugging in the Cosmote pocket wifi device to my laptop via a USB cable I was magically able to access my Cosmote account online and easily activate the 30 Euros of credit.

The Cosmote website is viewable in Greek or English language and it's very user friendly and easy to navigate. Thank you Cosmote.

In next week's blog we share our rookie mistake that we make while changing out the fraying furling line of the main sail and explore some more of Milos.