Aannsha’s Blog #15 – Back to school in Gibraltar

No-one told me about the condensation! You know when it’s cold outside and you go to bed in a nice toasty warm bedroom – and when you wake up, there’s often a film of condensation (condensed breath) on the window? Well, translate that to a yacht where all of the out-breaths from the night hit the ceiling of the small cabin you’re in and instantly condense, due to the fact that the ceiling is not that much warmer than outside air temperature. What happens? Condensation. So imagine all of that moisture clinging to the ceiling above you. Where does it go? Downwards. On to you.

Barry’s talked about this in his blog post and I can confirm that being plopped on by a drop of condensation will wake you up! I wondered what it was, as I awoke from my nightly slumber, but turned over to recapture what I could of my pleasant dream. As I did so, my hand brushed against the side wall of the cabin – basically, in a 36 foot yacht, the forward bed is squeezed tightly into the pointy end of the boat and the sides of the bed morph with the sides of the yacht. These sides also only have a thin layer of ‘insulation’ between you and the outside world, so the part of the wall that I touched felt damp. I sat bolt upright.

“Condensation,” Baz was already onto it and was scooping his side of the duvet towards the centre of the bed. “I suggest you move your bedding away from the wall and give it a chance to dry out.”

Enough said. I’m a bit of a princess when it comes to my sleeping space and the thought of my bedding (not to mention my head) being invaded by drops of breath kind of grossed me out that early in the morning. However, I quickly incorporated it into the I’m-a-Sailor mindset that I was fast growing and decided to accept it as a part of life for future bedtimes during cold weather. Shuffling myself out of bed and putting feet straight into slippers to avoid the cold floor, I quickly threw on a couple of extra clothing layers and set about positioning my bedding to dry out. Okay, it wasn’t sopping, but it was a bit damp around the edges.

I then accompanied Baz to the shower block and enjoyed a lovely hot solitary shower. The proportion of women to men in the yachting community is quite small, so the female toilets and showers are often empty. Bonus. I was pleasantly surprised as I hadn’t been sure what to expect, but the shower block at Marina Bay was spacious and clean. I didn’t have a hairdryer, but used the hand dryer on the wall and in a couple of minutes my hair was dry. Actually I liked how my hair had more body as I’d dried it with my head upside down, bent down under the blower. Since I’ve been reunited with my own hairdryer, I’ve continued to use this technique!

After a quick breakfast, Baz and I made our way to the ‘school room’ which was situated around the other side of the Sunborn floating hotel in a place called the Greenhouse. It’s named that as its walls are all glass. It was purchased from Holland where these floating buildings are quite popular. Our classroom was on the first floor (i.e. the one above the ground floor) and there were desks set up with a screen for presentations at the front of the class. It was pretty cold in there – well it was winter. The building was new to Rock Sailing, so they were getting to know how the heating worked. It didn’t really make much of a dent in the chill, during the morning anyway. Although by the time we went back after lunch, it had reached its warming potential and we were all able to take off our winter gear, down to tee shirts.

There were a few other fellows in the classroom and some of them were “Fast Trackers” who were training for the sailing industry, and the lessons we were doing were also a part of their curriculum. It turned out they were on one of the other Rock Sailing yachts moored next to us in the marina.

I enjoyed the VHF Radio Handling course. The theory was presented by Peter Ormond the instructor who made learning interesting and fun. He has obviously had decades of experience, and shared his wisdom along with jokes during the day. The lesson was accompanied by a very informative computer section that was projected onto the screen and we were also provided with an RYA VHF Radio Handling handbook. After lunch we all enjoyed the practical side where we got to work with VHF radios and sent and received different - and sometimes funny - messages. 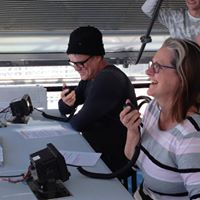 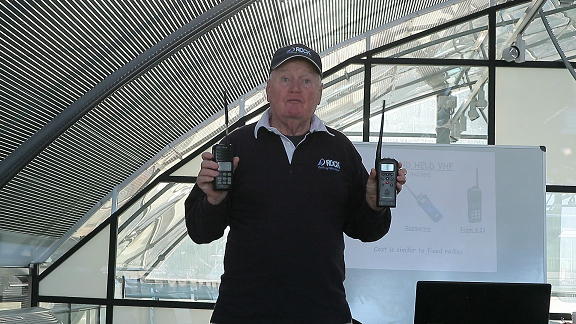 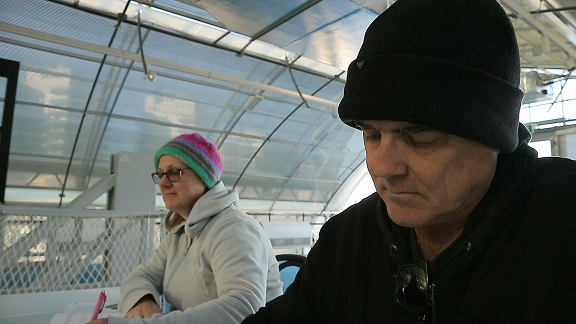 The ‘boys’ had found a nearby coffee shop that sold decent flat whites and I decided that once we got some cash, I would treat myself to one every now and then. I’ve always got our finite budget in mind, and coffee is after all a non-necessity. But hang on, we never stop to consider what we’re spending on wine or beer... but perhaps that’s another topic for another blog. Back to the VHF course. One of the Fast Trackers, Jack, shouted me a coffee when he found out I didn’t have any cash and I was happy to return the favour the next day.

For lunch, Baz and I discovered a place that advertised different wraps on its sandwich board. On entering, we were greeted by a friendly guy who seemed surprised that they sold wraps. He asked us which ones we wanted and wasn’t able to give us a list of fillings. Then he asked us how much they were. Each time he asked us a question, I had to scoot outside and read the information off the board! The order took a fair while to make and the fellow behind the counter began a conversation with the guy in the kitchen that went something like:

“Yes. Do we have the chicken filling?”

He looked at me. “We don’t have the chicken. Which other one would you like?”

“What do you have?” I asked. He looked blankly at me. I scooted outside again to look at the board and came back with a choice they could hopefully make.

While we waited – a while – for our wraps, I watched as the guy made me a coffee and instantly regretted ordering from there as he left the coffee under the group head while he heated up the milk, allowing the coffee to burn. Then he omitted to let steam out of the steam wand to clean it ... I decided to turn my barista head off, otherwise I definitely wouldn’t drink the coffee. I decided to ask this fellow how long he’d been working here. Maybe I was being hard on him.

“Not long,” he replied to my question. Ah, I thought, he’s new. Explains a lot.

“How long?” I asked, expecting something along the lines of this being his first week.

“THREE MONTHS?!” I shouted in my head! Outwardly, I smiled and mumbled, “Oh. I see.”

At that point, I seriously wondered what Sue (of Pasta d’Vine where I used to work in Beerwah) would have said to him to get him into shape. I smiled to myself as I realised how high my expectations are in the hospitality industry since working with her. Not a bad thing, I reckon.

Meanwhile, Barry and I waited patiently. While we looked around the bar, a middle aged man came in and immediately barked at the guy behind the counter.

“It’s the middle of the day and you haven’t got half of the chairs and tables out yet! Why is last week’s specials sign still out? The music isn’t on! You haven’t filled up the drinks fridge!”

Oops, I thought as the young man handed us our wraps, I’m getting the feeling that his boss is going to raise the bar on his work ethos! We sidled out quietly as his boss moved towards the counter.

The wraps turned out to be very tasty, but it had taken so long for them to be made that we had to hurry back to the Greenhouse for our afternoon’s session. We eventually got more organised and made ourselves ham salad sandwiches back at the boat.

After being given our results that afternoon, Baz and I returned to the boat happy in the knowledge that we had passed the practical and written test, and were both qualified and certified to have and use a VHF radio.

The next day Barry and I attended the RYA Marine First Aid course. It was a very instructive course and a good while since I’d done CPR while working in Queensland Health. Carrie Ormond was our instructor that day and I thoroughly enjoyed her presentation style too. She clearly and logically worked through the information and added humorous stories of real life examples to back up the learning. I must admit, I felt very welcomed by both Peter and Carrie.

There was a lot to learn, above and beyond CPR and even though I was frankly paranoid of falling overboard by the time I’d learned about hypothermia, cold water shock and drowning, it was a very valuable extra course to have done. The RYA accompanying handbook is an excellent reference and instructional book. Once again, Baz and I both passed – and I have since completely re-read the handbook since returning to Javea. I’m making it a quiet project to go through the handbook regularly in case an emergency does occur.

Returning to Rockefeller after day two, we discovered our new crew mate member, Dan, and our Skipper/Instructor, Mareike Grigo, were both on board. We enjoyed a lighthearted evening getting to know each other and I was happy to discover that Mareike was not only a qualified RYA instructor, but also a German equivalent trained instructor. Plus she had taught a Storm Sailing course and I figured if she could teach Storm Sailing, she would be a safe and competent instructor. It turned out that assumption proved to be correct as we discovered over the next two weeks of sailing.

I went to bed nervous and excited that night, at the prospect of actually beginning our practical Competent Crew course the next day.

I also had an eye on the condensation situation, as we weren’t able to sleep with the cabin door open as we had the previous night, which had alleviated the damp situation somewhat. The following day though, Mareike got us a heater, as the boat really was quite cold at night time. Barry and I found that the extra general warmth from the heater, plus opening the hatch above our head in the cabin by about 1cm at night, was enough to keep the condensation to a minimum. The extra duvet and blanket Peter had brought us on our second day meant we weren't cold even with the hatch open.

Waking up to a bright, cool, sunny day and quelling a knotted sense of anxiety that was trying to surface now the real learning was about to begin, I grabbed my shower gear and headed to the toilet block to prepare for the first day of sailing.

How did it go? I’ll let you know in my next blog.

Link to Aannsha's next blog