Aannsha’s Blog #144 – Beauty of Skyros and Ugliness of Trolls

Last week, a sacrificial anode fell off the prop shaft and when Baz replaced it, the new one immediately began to fizz. Not a good sign.

Fizzing like that is often a sign of stray current which must be travelling down the prop shaft from the engine. We had to get to Turkey as soon as possible in order to get this looked at, because while Baz has proven himself to be a bloody whiz at fixing many boat systems, he said himself that he just doesn’t know enough about boat electronics to fix this one. And if the trouble persisted and we didn’t have enough anodes, the stray current could interact with the metal on the prop shaft, eating it (and the propeller) away. And we certainly didn’t want that to happen, for obvious reasons.

So we began a fast Greek island hop towards Turkey.

Of course, weather often dictates our movements on A B Sea, and after leaving Skiathos, we took shelter from the Meltemi for a couple of nights in the attractive bay of Mourtia on another of the Sporades islands, Alonnisos. The trouble was, after the first day of high winds, a swell crept into the bay and A B Sea began to roll. If you’ve ever been on a very rolly boat, you’ll know that it’s horrible. After our second night, we both decided it was time to up anchor and make our way to another sheltered bay further east on the island. So we headed to Milia Bay and were delighted by what we found. 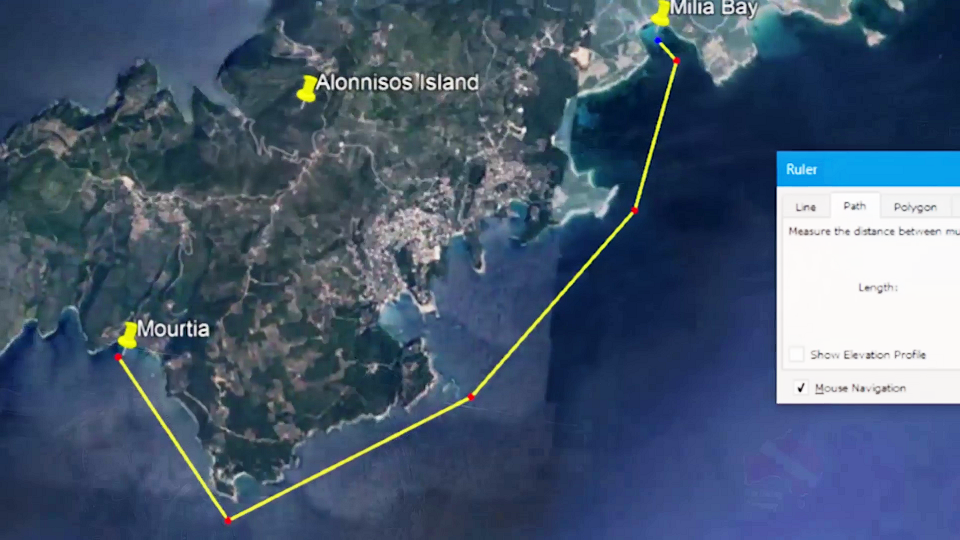 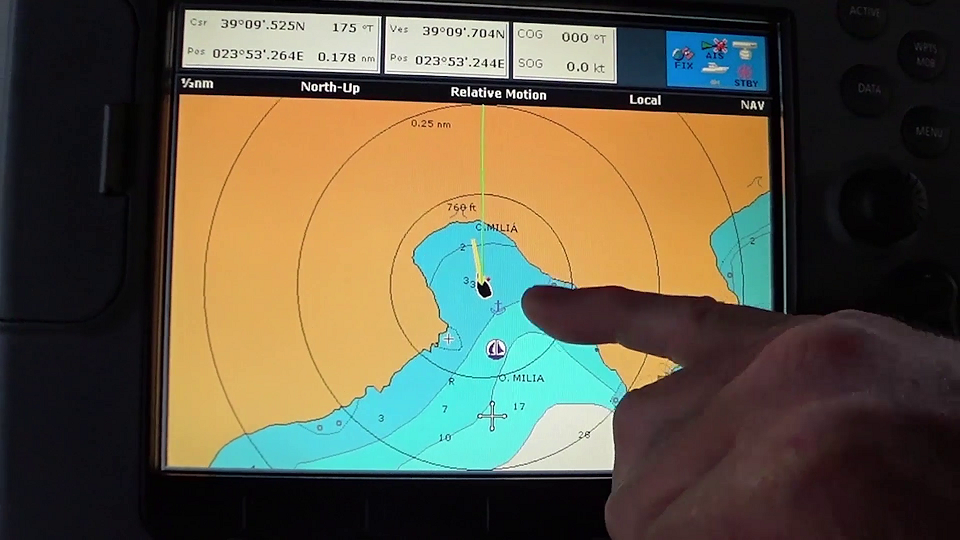 The chart plotter shows it as quite small, but it is in fact large enough for several boats to swing at anchor. It is a fairly long bay with pine tree studded sandstone cliffs on either side, and it culminates in a small sandy beach that sports a taverna. We enjoyed a good sleep in the calm anchorage that night, floating in clear aquamarine water.

With the sun just above the horizon, Baz and I upped anchor and we headed south east towards Skyros, the largest of the Sporades islands. We started out motoring in a super light breeze but by 7.25am we had both sails out, filled by 12 knots of wind just aft of our port beam.

We also ran the motor because Baz had been keeping an eye on the alternator and suspected it wasn’t charging the batteries correctly. As our bow thruster and starter batteries aren’t charged by our solar, he was worried that we’d run them down with use, and not charge them up again. Along the way using wind and engine, we achieved a good speed over ground (SOG) of 8.8 Kts and reached Skyros in a respectable five and a half hours. 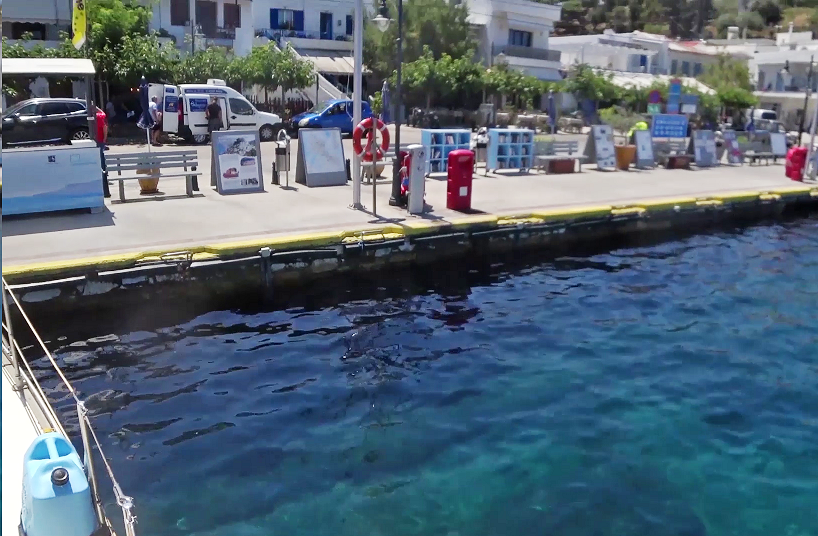 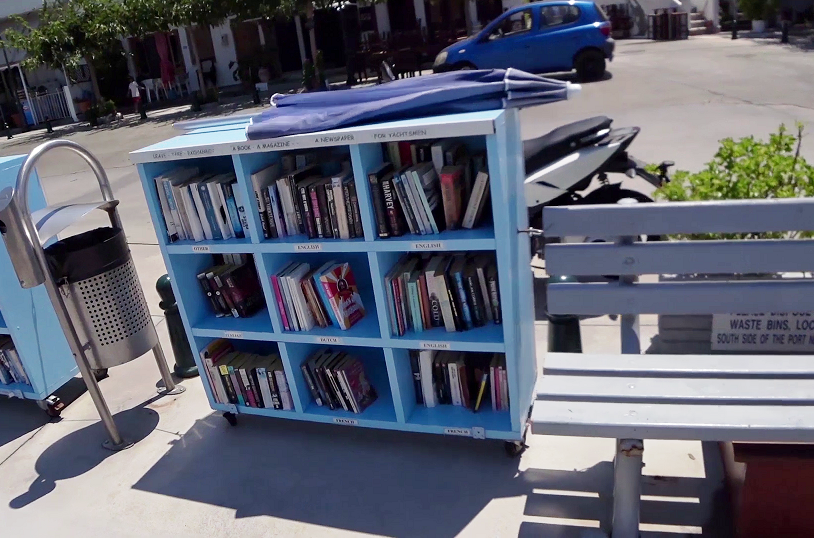 The harbour master at Skyros is very innovative and met us in his red rib as we approached the harbour of Limin Linaria. He asked us what we needed and offered a side to berth when he saw our dinghy on the davits. He then stayed with us while we deployed our fenders and then he and his crew of three assisted us in tying up to the dock. I was very impressed with this service and effused about the wooden steps that they placed next to our side gate! “Welcome to Linaria” was painted on the steps and I truly did feel welcomed!

This little harbour is pretty with a small but good choice of shops and restaurants, including a small supermarket where Baz re-stocked beer. 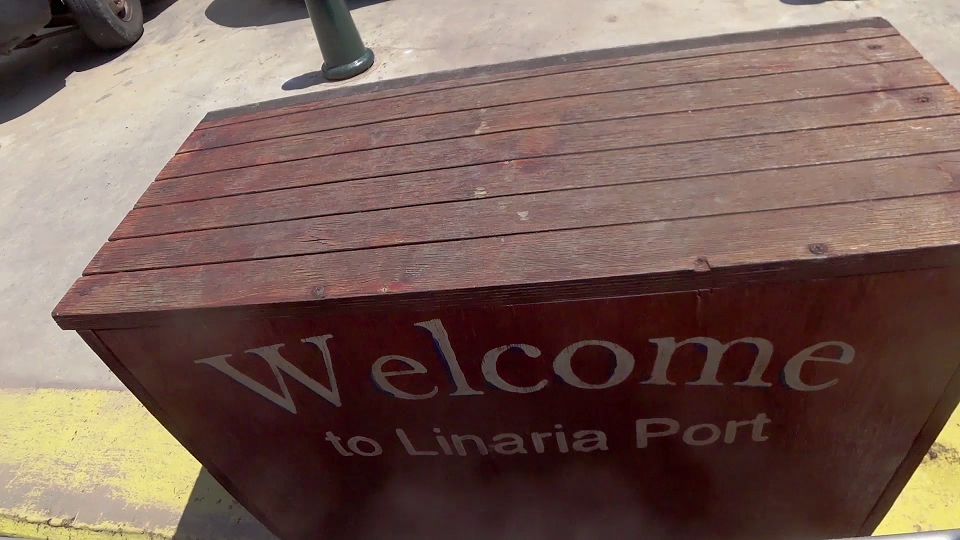 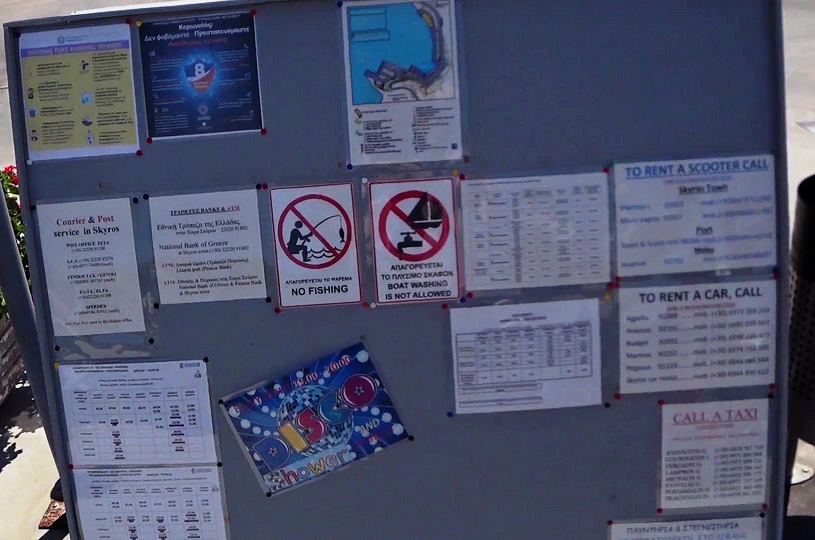 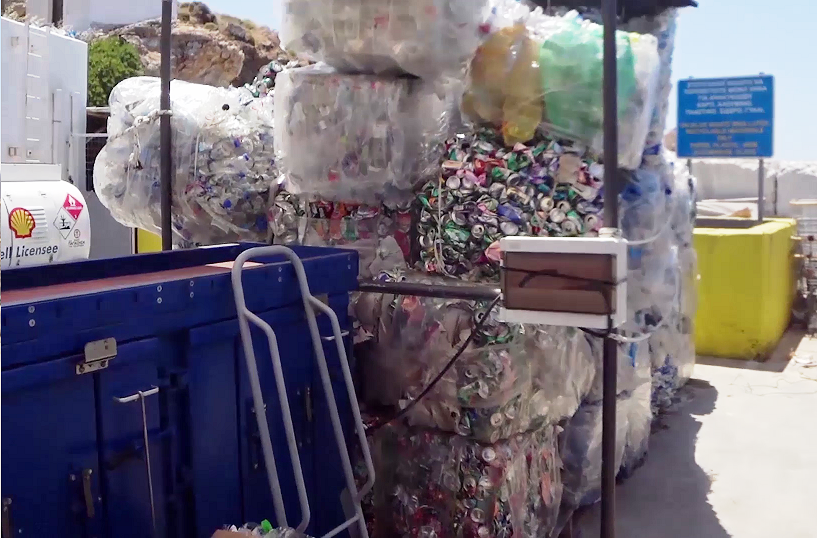 Along the quayside is a display of information about Skyros, the Sporades group, flora and fauna to be found on Skyros and a board with details on car and scooter hire, and also their disco showers that operate from 7-8pm daily with music, coloured lights and bubbles!! They even have a book-swap section with books of various languages.

After we put A B Sea to bed, we walked around the harbour, noting the impressive full scale recycling area, fuel dock and ferry terminal. We walked up the hill on the other side of the harbour and had a beer at an attractive taverna that gave us a great view of the port and cluster of mooring balls. On the way back to the boat we walked past the local fishing boats, with their nets drying in the sun.

If we’d had more time, we could have stayed for a few days to explore more of Skyros.

What’s up with the alternator?

Baz had been keeping an eye on the alternator situation for a couple of days, noticing as I said above, that the lights on the panel showed there possibly wasn’t any charge getting to the bow thruster and starter batteries.

Actually that was the reason we came into the harbour: to top up our batteries with shore power. 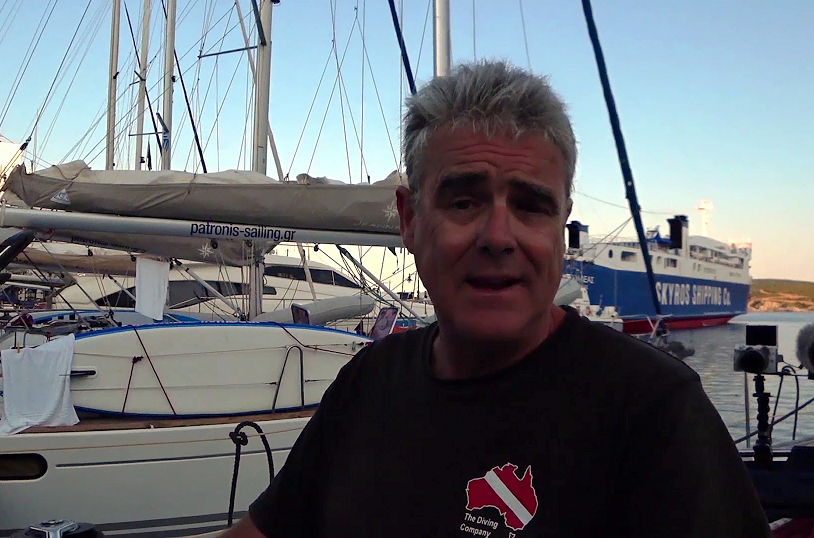 As you know we don’t usually stay on town quays and prefer to anchor out. But losing power to your batteries is no joke, especially if you’re trying to bring up exceedingly weighty 10mm chain with a bloody heavy anchor attached to the end.

The following morning, with full batteries, we topped up our diesel tank (a bit later than expected due to the ferry overnighting right by the fuel dock), but we were on our way by 8.15am and after seven hours arrived at a deserted sandy bay on what’s basically a large rock next to the small island of Psara. Again, we motor sailed and had a good SOG of between 7.6 and 8 Kts, at one point dodging a few tankers that crossed our path!

We anchored in 3 metres of sand with 20 metres of chain out and while there was a bit of wind blowing, the anchor held and we slept well, ready for our next island hop to Chios the following day. 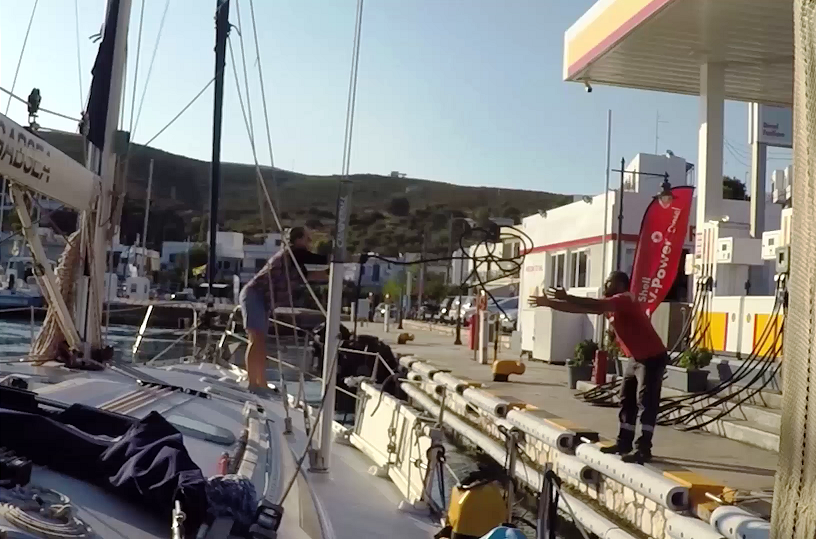 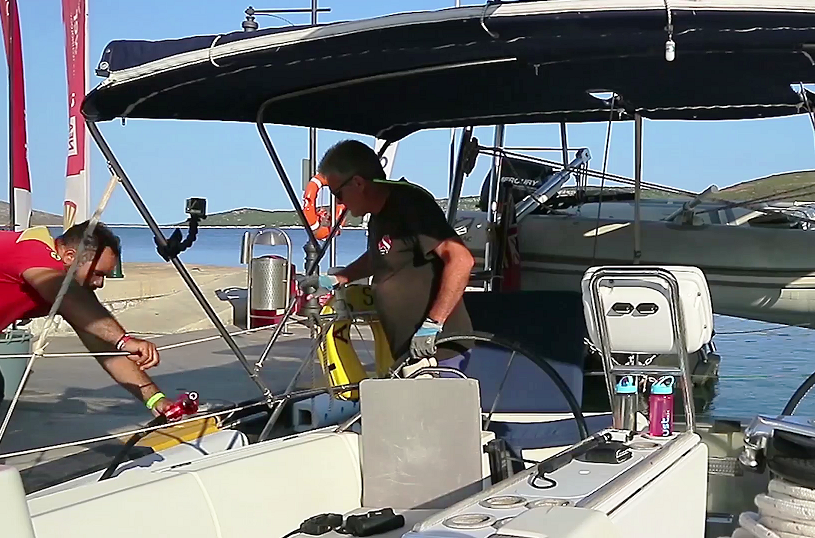 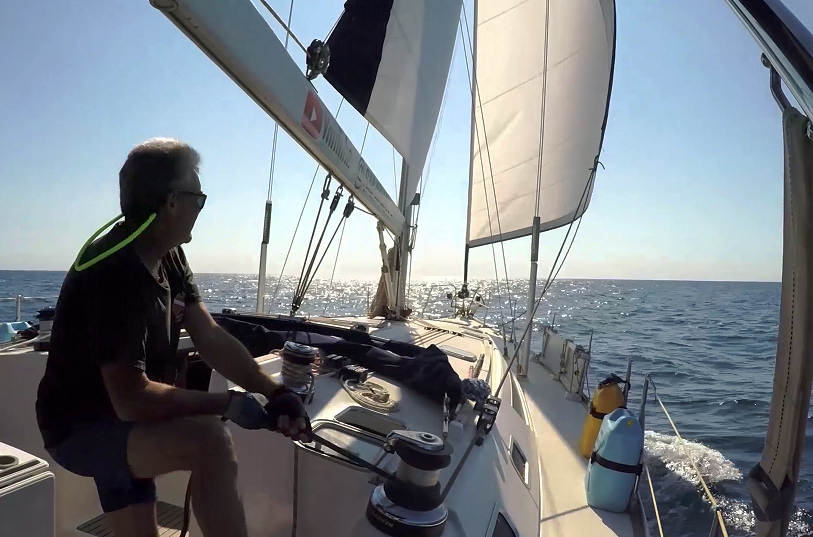 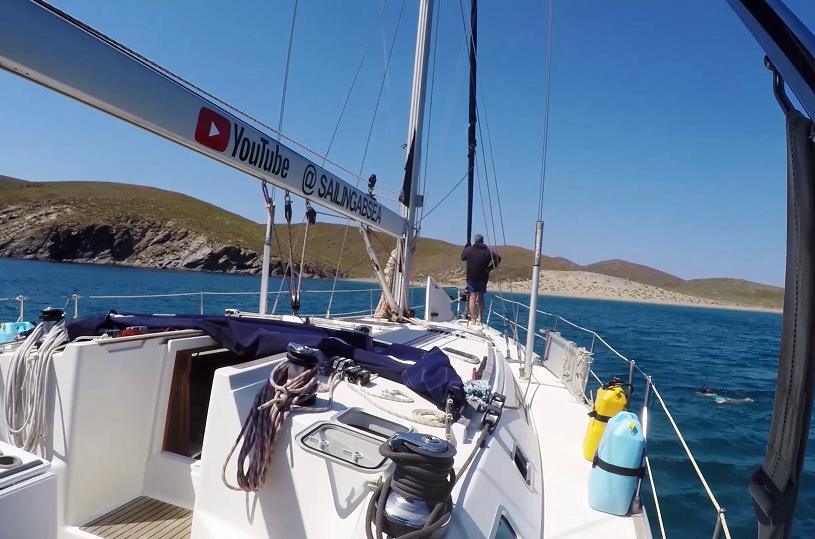 The Ugliness of Trolls

On our last video I received some nasty personal comments about my boobs from our resident troll. We usually banter with him but this time he crossed the line. Barry banned him from our channel so all of his comments have now been removed. Before he got ‘wiped’ I replied to him that my boobs are the only ones I’ve got, so if he didn’t like it, he could look away or watch another T&A (tits and arse) channel as there are a lot of those around. One of our other subscribers stuck up for me with some great comments of her own.

What did I learn from this?

That for the first time in my six decades around the sun, I am actually happy with my body shape and fitness and realised that the troll’s comments didn’t bother me. That was a nice discovery.

We also received a nasty email from a person (who we’d thought from earlier emails) had been quite nice, but they turned out to be just as disparaging and their comments basically highlighted their own inner meanness and littleness. If anything it annoyed me that someone thinking they are superior to us, could have the impertinence to dictate how I should dress because my aging bikini clad breasts offended them! Baz and I wrote a reply to them and after receiving a couple of further snide comments in their reply, we have simply chosen to ignore future emails from them.

My main points were:

Having said that though, all attacks carry energy and as the unexpected and nasty email arrived like a bolt out of the blue, it took me by surprise and I felt as if I’d been stabbed in the guts. This left me wobbly for a couple of days.

I even noticed that when I was editing this week’s video, I consciously edited shots of me in a bikini so my breast line was generally below vision.

Interesting Aannsha. Why was that?

I dug a bit deeper below my surface and saw it was driven mainly by a desire to feel safe from attack, rather than a sense of embarrassment. Driven by a desire to share positive encouragement to others like me, I used a photo of me (taken from the video in question) and added some affirmations. Here it is.

Until next week, I wish you a very pleasant week where you get a little closer to your dreams and aspirations and don’t have to deal with any idiot trolls.