Spring has sprung here in Sipiada, Evia Island in Greece where we’re holed up in A B Sea for a while during the almost global lockdown as we humans try to defeat the invisible clutches of Covid-19. So while there isn’t a lot of gaiety in terms of socialising, fun and party frivolities, Nature is showing off her vibrant colours as trees, bushes and annuals begin to bloom in the ever increasing hours of sunlight.

I couldn’t resist filming them for you, and loved hearing the loud humming as I approached some of the trees and bushes and watched bees and bumblebees busily collecting nectar for their larders. In the sunshine, the colours radiate and the poppies in particular seem to have a vibrancy to their red that shouts out “Life!” as they dance in the breeze. One of the gifts of this pandemic is that life has slowed down enough for us very importantly busy humans to literally stop and smell the roses. If we had a way of capturing smells for YouTube, I'd also let you share the scents of the jasmine and wisteria which are just heavenly.

Baz got busy installing a galvanic isolator (GI) and apart from filming his sections I was able to screw one of the instrument panels back in the nav station board, after he’d investigated whether it was a practical place to house the GI. It wasn’t, so I downed camera and felt very useful as I put four screws back in place. As Baz is much better at getting his head around the electronics and mechanics of A B Sea, its way more sensible that he tackles most of the real work. But I do like to do my bit, even though it is relatively insignificant.

Oh yeah, if you don’t know, the GI is a simple piece of kit that basically prevents any stray currents that we may experience when we’re attached to shore power in marinas, from eating away at the metals on the boat.

Anyway, once Baz had found a good placement for the GI – in the starboard helm lazarette, he set to cutting down the wiring and attaching the ground wire to the GI with spades that came with the unit. Then it was a matter of screwing it onto a wooden board in the lazarette and hey presto, another job can be ticked off the list!

Pretty much, until we tried to remove the ‘key’ that sits in the end of the prop that attaches to the flange and prevents it from slipping out. Baz had sanded away the build-up on the shaft ready to slide it through the cutlass bearing, but unfortunately wasn’t able to complete that particular task as we couldn’t work out how to remove the key. We’ve asked for ideas on that in the video. 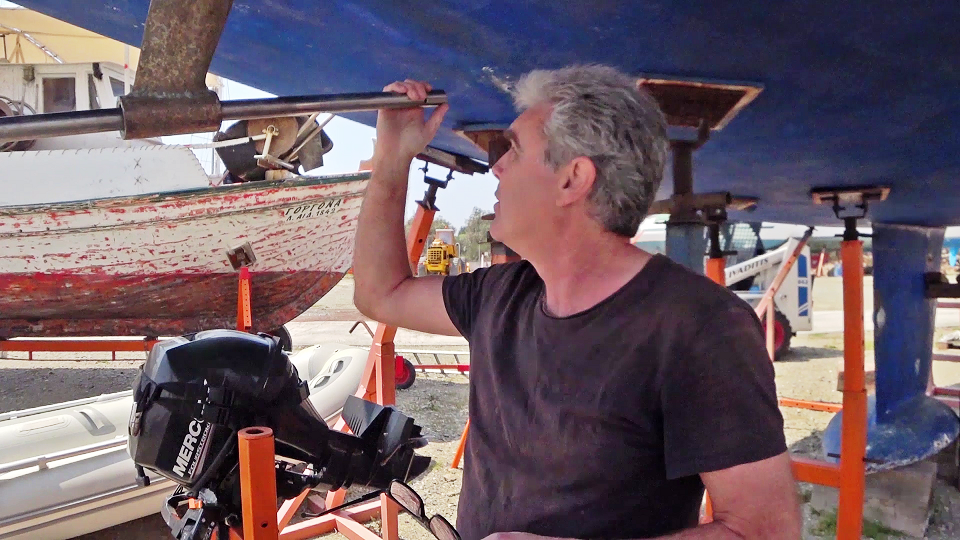 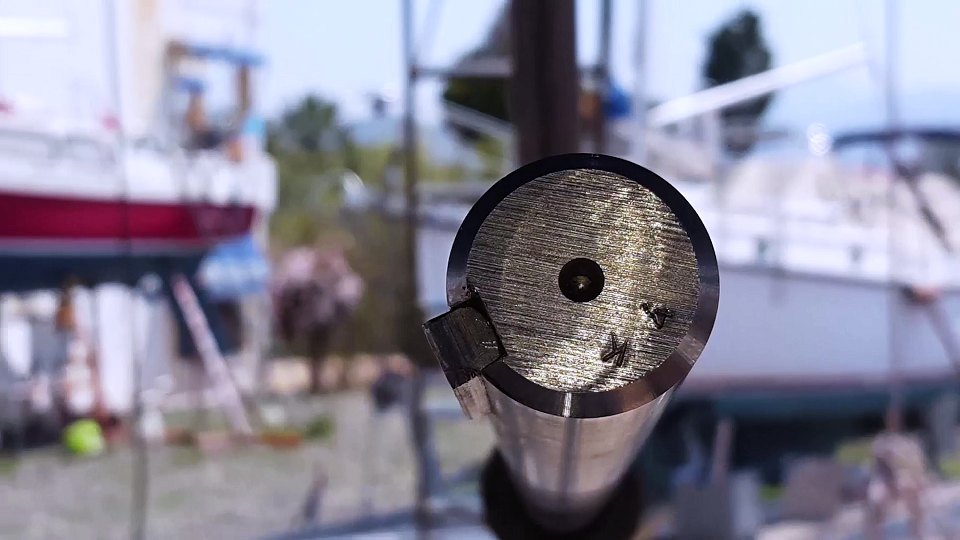 We get to celebrate Easter twice on A B Sea this year. Last Sunday was ‘regular’ Easter that our UK and Aussie friends observe. This coming Sunday is Orthodox Easter that is observed here in Greece. We’re not religious, but can’t pass up an opportunity for a good bit of chocolate, so last weekend I decided to find a recipe that we could indulge in, given we didn’t buy any chocolate Easter eggs.

It’s so simple to make! There are several similar recipes on the internet, but this is the one I went with: Vegan Fudge Recipe (just 6 ingredients!) All it contains is peanut butter, cocoa powder, maple syrup, coconut oil, salt and vanilla extract. The author actually uses almond butter but I didn’t have any of that, so substituted. In no time at all I’d mixed it together and poured it into a container to leave in the fridge overnight to set.

Earlier that day Baz had shown me a pic of a shot glass made out of bacon rashers, lined with chocolate and which contained whisky. He’d raved on in some blokey way at how fantastic this would be to eat, while I quietly grabbed a bucket to puke into.

It’s a measure of love for my husband that I actually set my mind to how I could bring bacon to the vegan fudge without offending any more people than the whole of the vegan community. Eventually I came up with a brilliant solution: Fry tiny bacon pieces in maple syrup and sprinkle them on top of the fudge! Revisiting the fudge recipe, I did note that it’s also paleo, so if I reframe it to paleo peanut butter fudge, then adding bacon sprinkles to it didn’t seem to be quite so irreverent.

Easter morning arrived and I couldn’t wait to try out my experiment on my man.

Turns out he approved! I did try one square with bacon sprinkles and as a taste combo, it actually works. I think the peanut butter worked better than almond butter would have. The plain fudge was also deliciously squidgy and chocolaty, and has made its way to my handwritten recipe book for future use. 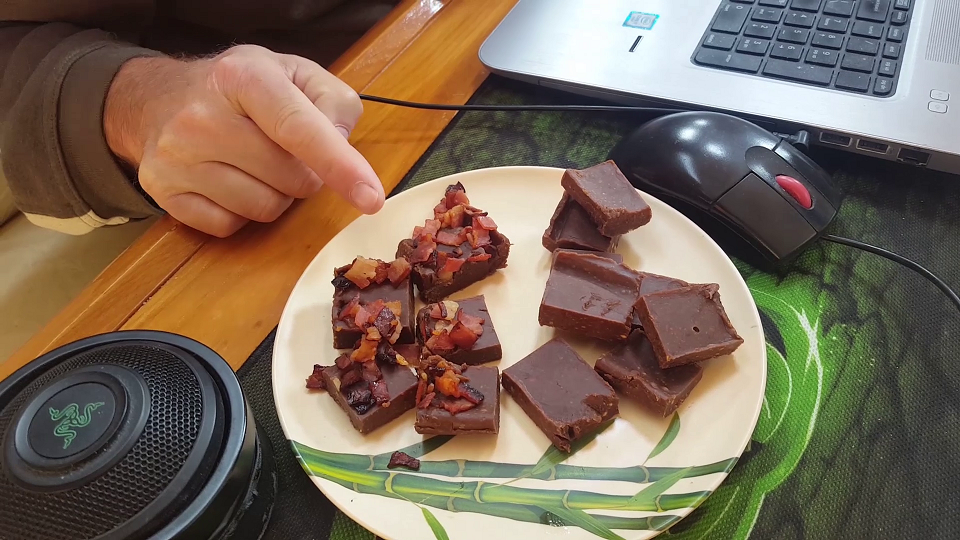 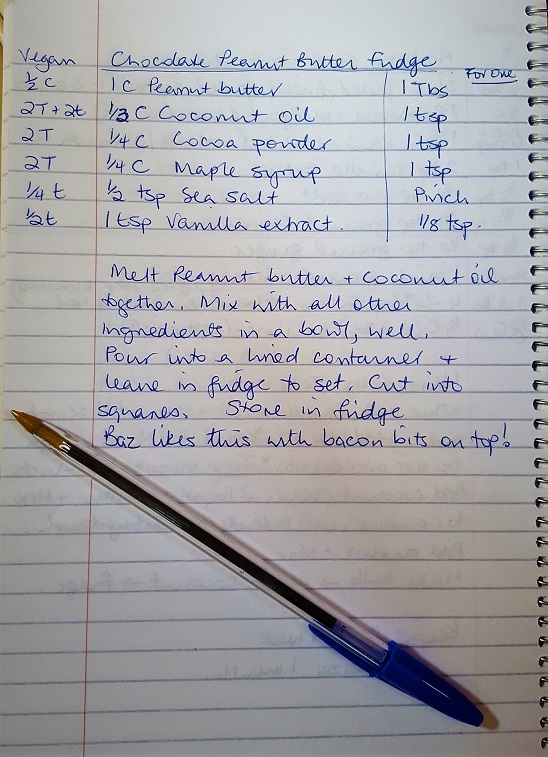 Can’t wait to try this out on crew when they come on board. Bacon bits optional of course.

I morph into Mr Bean with the mangle

Ever since the mangle has arrived, I’ve been wanting to try it out. Now we’re back on board, I’ve found one place that I can mount it, so the handle has free movement, and that’s on the starboard pushpit rail.

I hand washed my laundry in the studio that we still have access to and brought it over to A B Sea to test the mangle’s worth. (Because it was expensive and so far hadn’t impressed me with the shoddy workmanship but anyhow)… After hauling the bag of soggy washing up on deck, I set to giving it a good squeeze in the hand wringer.

Turns out it wasn’t as easy as I thought it would be. Yes, I’d observed mum and grandma using their mangles in my childhood (doesn’t that make me feel old), but it wasn’t so much technique – well, maybe it was – so much as an unstable fitting.

I started wringing one item and the mangle swung forward. I straightened it up, and it wanted to swing backwards. Bearing in mind I’m precariously balanced on the sugar scoop with a 5-metre drop to the ground beneath me. I’ve got water sloshing from one side of the mangle to the other, so any part of clothing I’ve already wrung out is simply getting wet again.

How many hands do I need for this job?

The washing was heavy going in and needed one hand to support it while I used another hand to push it to the roll bars, another to turn the handle and yet another to stop the mangle from swinging forward into the back stay.

“This isn’t an ideal system,” I commented to Baz who was filming me.

“Well you haven’t tightened it enough.”

“It won’t go any tighter,” I replied.

“Well obviously it can or it wouldn’t be moving,” went the gist of that conversation.

I bit back with a sarcastic response and continued and when we both came back to it later, Baz admitted that yes, the pushpit bar was too thin and rounded to be a decent attachment point.

We’ve decided to get a couple of bits of wood made to shape that we can use as a mounting block – similar to the one we have on the other side which supports the dinghy engine. It will have to cover both horizontal rails though, otherwise it will just swing around on itself and won’t work. Hmm, another job makes its way onto the Boat Job List.

A big thank you to our supporters

We also welcomed aboard a new Patreon couple, Buck and Dania Buchanan, and gave a huge thanks to The Old Travel Bums (Heather and John Drummond) for their generous donation.

So that’s what we did week.

How has your week been? Getting stir crazy yet, or are you beginning to settle into a new rhythm?

Whatever you’re doing, until next week, stay safe and healthy.