Once upon a time, many lifetimes ago, I was a professional DJ. I started off doing mobile discos for birthdays and weddings, I was just 15 years old then. Later I began working in nightclubs and one gig led to another gig until I was working 5 different pubs and clubs 6 nights per week.

In November 1986 a stupid morning-after-the-night-before drink driving accident lost me my driver's license for 12 months and my best mate and fellow DJ Alan Bates suggested I fly out to Tenerife in the Canary Islands where they had a 12 month tourist season and I'd have no problem getting a job. He was right.

I loved the Tenerife life so much that after 12 months I didn't bother returning to the UK, instead I spent the next 10 years living the party lifestyle. During that decade I met so many wonderful people, many of whom became firm lifelong friends and through social media we've all kept in touch.

Roll forward 30 years and there's an announcement on Facebook that there's going to be a reunion on the 5th of October 2019 in Manchester UK. A B Sea was anchored at Athens, Greece which meant that Manchester was only 2,623 kilometres (1,629 miles) away. Time to book a flight.

The original plan had been to leave Aannsha in charge of A B Sea at anchor in Varkiza Bay, mainland Greece where there was protection from the prevailing north wind. We'd anchored in 4 metres (13 feet) of water, let out 40 metres (131 feet) of chain, that's a scope of 10 : 1. However the wind gods decided that they'd do a complete 180 and bring some big wind from the south. Varkiza Bay is very exposed to the south so we moved A B Sea to Kavouri Bay slightly further north and protected from the south.

Kavouri bay is 95% weed on the bottom and it took us three attempts before we finally got our anchor into a sandy patch and got it dug in. We both dived the anchor and we were very happy with how it looked.

After a calm night and a good night's sleep, Thursday morning rolled around and we checked the weather online. Thunder storms were predicted. As the morning wore on the sky darkened and on the horizon low clouds, almost black in colour, were illuminated with flashes of lightening. We quickly folded away the bimini and just as Aannsha closed the last deck hatch the first big raindrops started falling. A minute later the squall was upon us. The wind leapt up to 40 knots driving the rain almost horizontal. The rain was so heavy it became a compete white out. The whole thing probably lasted 10 minutes before it rumbled off to the north.

Once the sea had calmed down Aannsha dived the anchor to see if it had moved. It hadn't, if anything the 40 knots of wind and the weight of A B Sea had driven it even further into the sand. That was good.

The rest of the day passed uneventfully and at 6.45pm Aannsha took me ashore in the dinghy where I hopped into the rental car and drove to Athens international airport. I got there at 7.45pm just in time to hand the car keys back to the rental guy and wandered into the airport to check in.

As I was only going to be in the UK for 3 nights I only had my backpack with me so check in was straightforward. My flight was scheduled for 10.45pm Thursday and I'd arrive in the UK at 12.55am Friday. Time for a beer.

Catching up with my brothers

My middle brother (I'm the oldest) Steve's house is only 20 minutes from Manchester airport so he picked me up and once we were at his house we had a quick beer and shared some stories before hitting the sack.

My youngest brother Phil stays at Steve's place when he's up north on business so Friday morning all three of us had a good catch up over breakfast. Then Phil was off to work, Steve had some teleconferencing to do and I settled down to catch up on A B Sea's social media, promote the blog and reply to comments and emails.

Friday afternoon Steve picked up his children Naya and Monty. The last time I'd seen Naya was 15 years ago when she was 1 year old and Monty hadn't even been born. They're both great kids and even though I was stranger to them we enjoyed some good chats.

Phil didn't make it back up north from work so he wasn't able to join the four of us for Friday evening dinner at a good old fashioned English pub just 7 minutes walk from Steve's place.

Saturday, just after lunch, Steve dropped me off at the Premiere Inn near Bury and as I walked through the doors to reception I was greeted with shouts of Bazza! Standing just inside the door were three old mates that I hadn't seen in 30 years. Alfie ONeil, Markus Gee and Tony Walsh. All very talented DJ's. After a quick exchange we agreed to meet in the downstairs bar for a few drinks at 5.30pm before getting a taxi to take us to the venue for the reunion.

I checked in and found my room, it was very clean and tidy with a super comfortable bed. I unpacked my laptop and settled down to catch up on some blog writing. 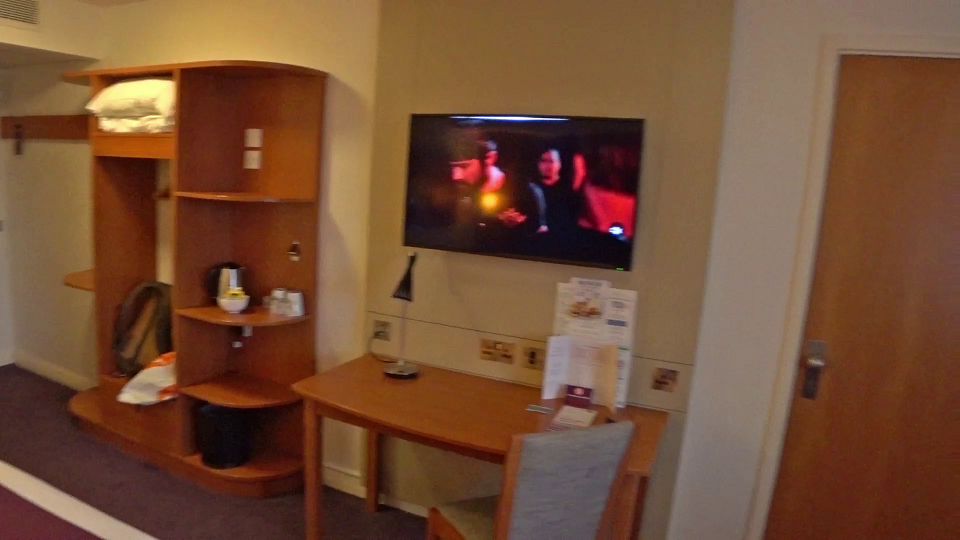 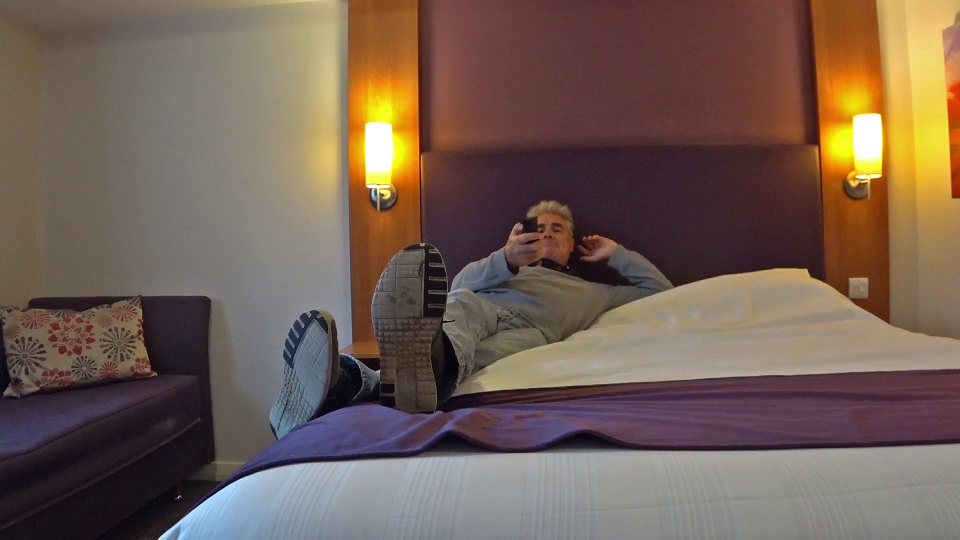 Later when I arrived at the downstairs bar I caught up with Tara Maher. She was there with her 21 year old daughter who was interested to meet all of these people her mum had been talking about for so many years.

Drinks done we all clambered into a maxi taxi and headed off to The Boro Club. The venue was superb and I have to tip my hat to Paul 'Creepy' Crawley, another fellow Tenerife DJ, who is the manager of the club. The décor and sound system are top notch.

Not every DJ that was there that night opted to play a few tunes, but those that did played all the right stuff and the maestro Des Mitchell, who's still bringing the house down in the Mallorca club scene at aged 60, played an absolutely blinding set.

Catching up with so many old friends was awesome and the time flew by. When Tara tapped me on the shoulder and said it was 2.30am and did I want to share a taxi back to the hotel I figured that I'd better get off to bed as I didn't want to be feeling too rough for the flight back to Athens Sunday afternoon.

Thankful that I didn't wake up with a hangover I went downstairs and enjoyed a full English breakfast and some more catch up time with half a dozen of us that chose to stay at that same motel. My old mate Tony Walsh dropped me off at Manchester airport and I hung around for two hours until my flight was called and we landed on time at Athens airport at 9.30pm Sunday. A fast taxi ride back to the beach that A B Sea was anchored off followed by a walkie talkie call to Aannsha to let her know I was ready to by picked up in the dinghy and I was home and opening a cold beer by 10.30pm.

Aannsha and I shared stories, seems like things got challenging a few times, but the anchor held firm and although she didn't get much sleep as most of the strong winds happened during darkness she was pleased that she'd gone through the experience and felt more confident for it. You can read all about what she did while I was away on her blog this week by clicking here Aannsha's blog #105

The next day the wind was blowing out of the north west and the anchorage was uncomfortable so we hitched the dinghy up on the davits, brought up the anchor and sailed south west to the Greek island of Poros. We'd stopped there for one night on our way through from Spain to Turkey in 2018 and wanted to visit again to have a look around. It was also a nicely sheltered place to anchor while we waited for the weather to settle down and the wind gods to decide which way the wind was finally going to blow.

The trip across the southern part of Athens Bay meant that we had to cross the Athens traffic separation scheme (TSS). Athens has so many big ships coming and going that there has to be some sort of orderly flow otherwise it would be mayhem. The rules of the road (or sea) say that if you're crossing a TSS you must cross at an angle as close to 90 degrees as possible. We were quite fortunate that a lot of big ships passed north and south before we got to the area of the TSS and we only needed to dodge behind one big ferry heading north.

We had a great sail with winds up to 27 knots and at one point we had A B Sea zooming along at 8.1 knots which is pretty good. We had 3 anchorages chosen at Poros. The first one, closest to Poros quay turned out to be too deep for our comfort zone. We dropped the anchor in 15 metres (49 feet) and let out 45 metres (148 feet) of chain, a scope of just 3 : 1. Not good.

Anchor up and taking a look at the next bay along, I didn't like the depths in there either so we finally tucked into a small bay and happily settled into 7 metres (23 feet) of water with 35 metres (115 feet) of chain out which gave us a scope of 5 : 1, just perfect for this protected little bay where we planned on spending some time catching up on editing and writing before we began the last few hops towards our winter haul out destination.