If you’ve lived in Australia since the 1980s you’ll already know that Slip Slop Slap means ‘slip on a shirt, slop on sunscreen and slap on a hat’. SunSmart was a successful campaign aimed at keeping Aussies and Kiwis (Australians and New Zealanders) protected from the harsh effects of the sun (specifically UV). There’s some controversy as to the effects of slopping on the sunscreen vs lowered Vitamin D production and possible risk of cancer from the chemicals in the sunscreen itself, but that isn’t the subject of this blog.

I just know that when Baz and I took advantage of the rare windless day in Greece’s summertime to change out the mainsail furling line, we didn’t anticipate it taking us 5 hours. When you consider the headsail furling line only took one hour to replace, we figured this would also be a fairly quick job.

How wrong could we be? In fact, I think when Baz said words to the effect of “How hard can it be?” I figured that was tempting fate. And yep, it was.

On the face of it the day was perfect with no wind to fill the sail when we unfurled it. We had to bring it fully out because we had to drop it in order to unhook it from the furling mechanism. Once that was done we could unscrew the big screw that held the furling line in the base of the mechanism, remove the old line, wind on a new line and reverse the process.

However, pretty much every step of this task took far longer than anticipated for various reasons. The two U-shackle pins had been put in on the wrong side of the access panel and left very little room for Baz to unscrew them; this alone took one and a half hours.

Slightly more than halfway into the five hour task, standing in the blazing sunshine (no clouds that day) and 36C / 96.8F heat, we both began to experience heat exhaustion. We were determined to get the task finished though because once the line was replaced, we’d still have to re-attach the sail to the furling mechanism, then raise the mainsail in order to furl it away and we didn’t know when or if the wind would pick up. And we couldn’t afford to take the risk of raising the sail in Milos’ usual wind conditions. So we pushed on.

Baz was doing all of the hard work, while I was the roving camera chic and also gofer (go for this or that tool), as well as handy knot-tying person (I tied slip knots in string which I looped around the screws and shackle pins so we wouldn’t lose them inside the base of the mast). But Baz had the responsibility of doing the job as well as manually hoisting the main sail.

As we got hotter, we both experienced heat exhaustion symptoms. Baz was sweating heavily, and breathing deeply, as well as developing cramping muscles in his hands but he soldiered on. I wasn’t about to let him down, so I gritted my teeth and hung in there with him. However, I hadn’t drunk much water that morning and had left our water bottles down below and didn’t realise I was dehydrated until I began to feel sick and light-headed due to low blood pressure.

After four hours we’d replaced the line and after Baz had tightened the pins on the U-shackles, he hoisted the mainsail. It was a huge effort and about half-way up we figured it would be a good idea to use a winch. That made it easier.

But when we went to furl the sail back in, it stopped after about 30cms / 1 foot. We both realised what we’d done wrong. Fuzzy thinking due to heat exhaustion had caused us to not wind the furling line all the way up the ‘worm’ screw furling mechanism.

We've made a mistake!

“Oh f@#$” said Baz. “We’ve got to drop the sail again and disconnect it from the furling mechanism in order to wind the line on”.

“I feel sick,” I replied. I didn’t know if I’ll manage to hold up any further.

Just climbing down the companionway steps to the galley had me shaking and I had to stop on the way back up, feeling like I’d pass out if I didn’t rest. I thought I was going to throw up. Baz got impatient, which I now put down to his having heat-stroke, but I knew I wouldn’t be any help to him if I passed out, so I jumped in the sea which cooled me down very quickly. I was able to return to the job after that.

Baz wound the line onto the screw and then we both began to hoist the mainsail until there was enough line to lead back to the winch.

Fixing our rookie heat-befuddled mistake took us another hour. But we got the job done before the wind picked up. And we’d learned some valuable lessons.

Every island we explore reveals its unique gifts and Milos was no exception.

Adamas harbour has colourful water-side restaurants and a pretty beach. 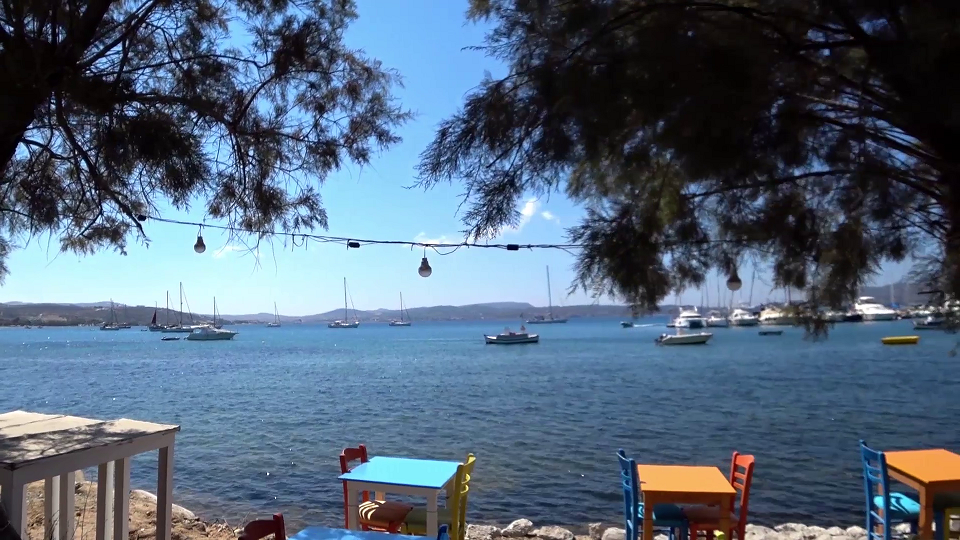 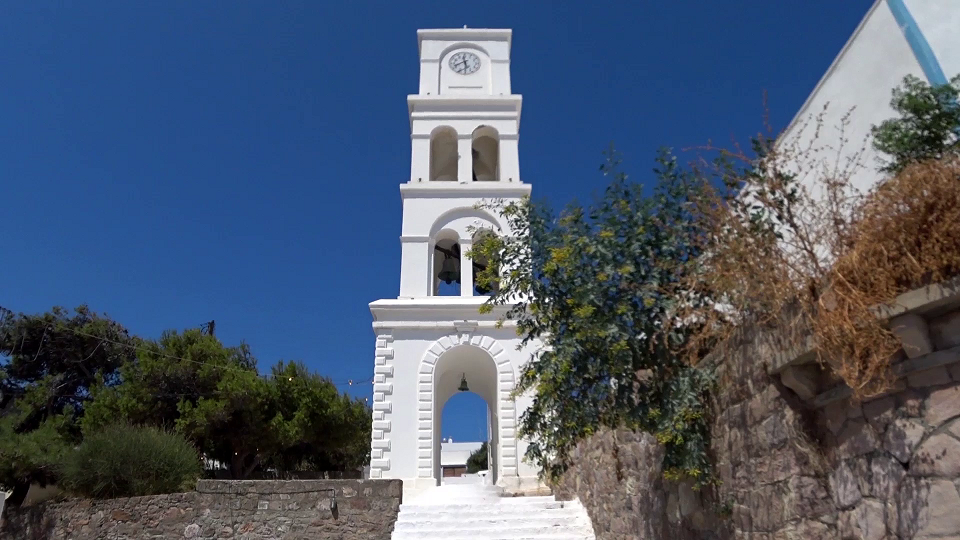 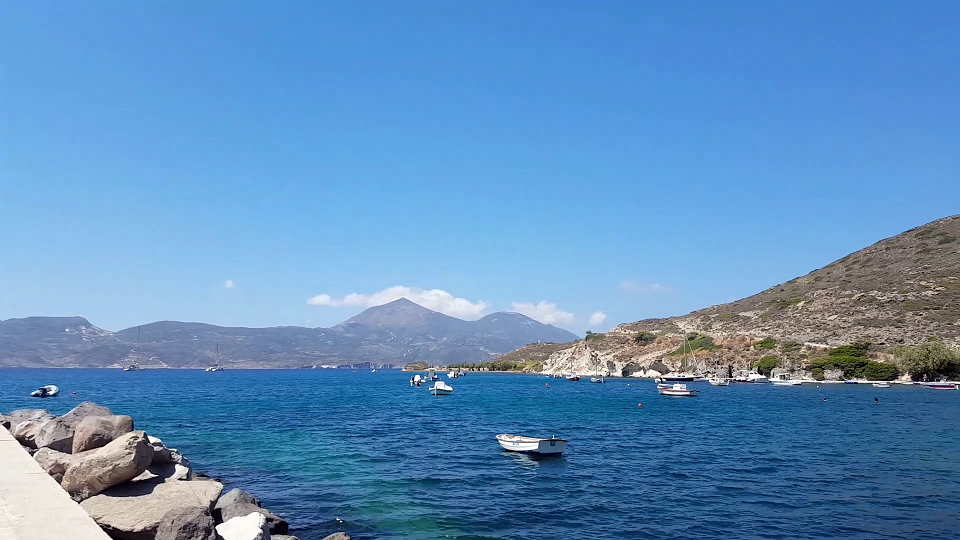 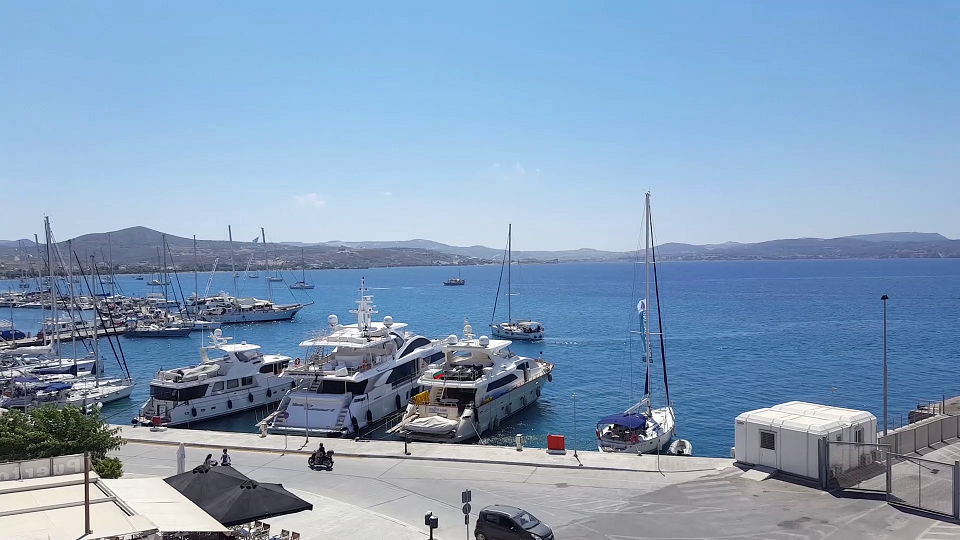 Triovasalos can be reached on the bus to Plaka, costing 1.80 Euros (AU$3). Each leg of the journey costs that much per person, whether you do short hops or the whole journey in one go! This town has one main street and is great if you need the post office or internet data. We had a surprisingly tasty lunch at a local taverna where most of the local Greek guys in Triovasalos seemed to be hanging out talking, eating and drinking! The new owner of the taverna was a friendly chatty guy and we left for the Plaka well refreshed. 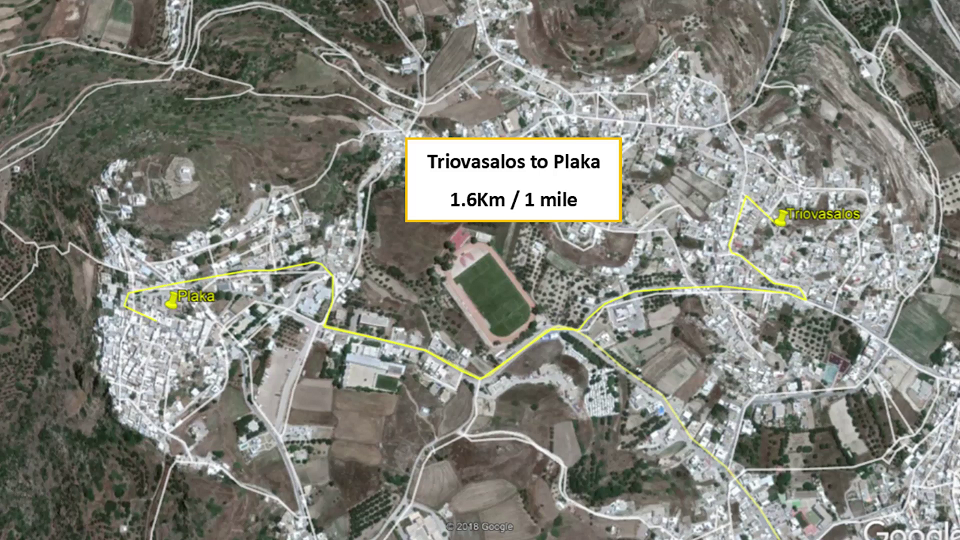 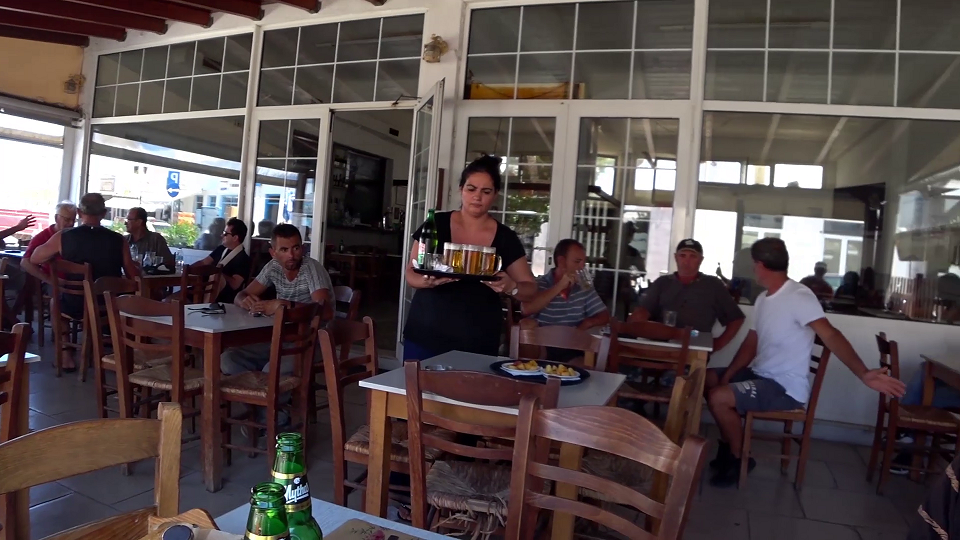 Plaka is the main town in Milos and is a delight for the eyes. It is perched on top of a rocky hill overlooking the gulf of Milos and there’s a 13th century Venetian castle right at the summit. It has pretty white washed buildings along narrow winding lanes that makes it impossible for cars to enter. You’ll see cars further down the hill near the bus stop, but at the top, only bikes and mopeds or donkeys.

This village is the perfect place to visit art and gift shops and even pick up a small reproduction of the Venus de Milo (the original now sits in the Louvre, Paris); or stop for refreshments in one of its charming tavernas.

Baz and I stopped for a coffee and beer in one such place and afterwards rambled around the narrow cobbled streets where cats lazed on shady corners and doorsteps. We were treated to a marvellous panoramic view of the entrance to Milos Bay from the white walls of the Mesa Panagia church. Stunning.

On our way back to the bus stop we stumbled across the Sand Museum which is owned by an artist. He’s collected sand from all around the world which he’s mounted on little plaques and ordered around the walls of his studio. He makes the most amazing pieces of art from this sand ranging from coasters to portraits and abstract designs. Some of the sand has a high proportion of metal in it and he lets you dip a magnet into a bowl of sand to pull out the metal. He also sells hour glasses that filled with ‘metal sand’ and stand on magnetic bases. When the sand runs through the hour glass, the metals shards form a pleasing dome as they interact with the magnetic field. That place was well worth a visit.

After catching the bus back to Adamas, Baz and I dinghied back to A B Sea, and spent the rest of the afternoon cooling down in the sea off the back of the yacht.

The following morning we had a pretty exciting phone call, from Courtney, a journalist who works at Take 5 Magazine in Australia. She interviewed us over the phone andour story will appear in the September 2019 monthly edition of Take 5 – how good’s that!!

Our time in Milos is coming to an end and next week you can find out how we get on topping up our water and diesel in the harbour, before we head north towards Athens to pick up our son Luke who’s having some much deserved holiday time with us on A B Sea.