Aannsha’s Blog #93 – Gifts from Poseidon on way to Ios

We left Amorgos at 11am on Wednesday the 3rd of July and headed for Upper Koufanisi which was 13.5nm to our north west. It was a sunny day but there was little wind so we motored, getting 6.5 knots of speed.

On the way I spotted something white in the distance. We weren’t sure if it was a fender or a piece of polystyrene but we headed over to check it out. Armed with a boat hook I stood at the bow and to our happy surprise it turned out to be a fender! I managed to hook it using the short piece of rope that was attached to it and I was happy to discover it was also fully inflated! The shape of it lent itself to be used as a step fender which was pretty neat because our old one had a crack in it and had completely deflated.

Saying many Thank You’s to Poseidon and the universe, I replaced the old step fender with this one. What a great start to the day!

We dropped anchor at 2.10pm in the lovely NE bay on the island and the anchor dug firmly into the sand at 6m depth in crystal clear water. This anchorage reminded me of the Spanish Balearic island of Formentera because it was so busy. There were regular small ferries bringing people to and from the jetty and there was a popular taverna on the beach. By the evening most of the boats had gone and we settled down for the night. But there was a very slight swell at right angles to A B Sea and we had a bit of a rolly night. Neither of us slept much and we upped anchor early the next day - around 8am.

Just like that we were on our way to Ios! We visited Ios on our way from Spain to Turkey last year and I remembered how much I’d liked the Village (old town). We’d had a pretty hair raising experience getting into the bay that time around because we’d been caught out in suddenly increasing strong winds (35 knots) north of the island and Baz had a hard time furling in our large headsail.

We didn’t want a repeat of that experience so this time when Baz noticed the sea state showing an increase in wind from the 20 knots to 30 knots, he decided to reef in the headsail so we wouldn’t be overpowered going around the west side of the island.

Unfortunately, the furling line, (which we’d been keeping an eye on because its outer sheath was fraying), got bunched up behind the jammer when the sheath separated from the main core. And we were heading into stronger winds!

Fortunately though, I’d had a strong ‘message’ from my intuition that morning which had led me to reading the RYA handbook on how to tie a rolling hitch knot. The conversation in my head had gone something like this:

Little Inner Voice (LIV): Can you remember how to tie a rolling hitch?

Me: Err, not sure, why would I want to do one of those?

LIV: If the furling line frays you might need to use one.

Me: I think I can remember how to tie one.

LIV: If you need to do a rolling hitch, it’s usually in an emergency (to support another line). Would you regret it if

you didn’t remind yourself how to tie one?

I read the RYA handbook. But the hitch was shown taking the strain going from right to left. I looked at our furling line and realised we’d need it going from left to right. I’m not very good at mental calculations involving spatial images and it took me a while practising with two lines, to embed it in my memory.

So when we were reefing the headsail and Baz said that the sheath was bunched up on the outside of the jammer (clutch), I told him it was okay, if we got another line I could tie it to the furling line with a rolling hitch and we could support it on the other winch until we figured out a solution. So that’s what we did. I also went down below and got the electrical tape out of a toolbox and we taped the outer sheath to the inner core so it was skinny enough to feed through the jammer. At that point, we could furl the headsail in and the boat, which had begun to heel more than we’d have liked, came back under control.

Relieved, Baz suggested we put more tape around the line further back, as an enforced reefing point, so the broken part of the line wouldn’t got out through the jammer again. We also made a similar mark on the inhaul line of the mainsail which was also showing signs of fraying. We didn’t want to go through that experience again.

A couple of hours or so later, we were safely anchored in Milopotamou large bay (our third anchoring option as the smaller bays were full) in Ios. A couple of days later we anchored in Kolitzani bay next to our sailing buddy Jim Furness on Acheron. Jim had come from an island to the north east of Ios, and we were all overjoyed to see each other again! 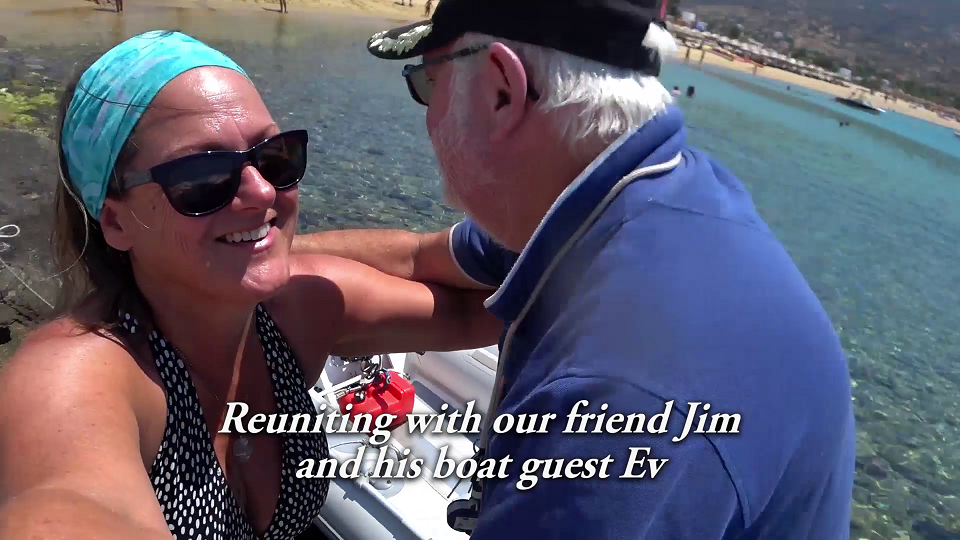 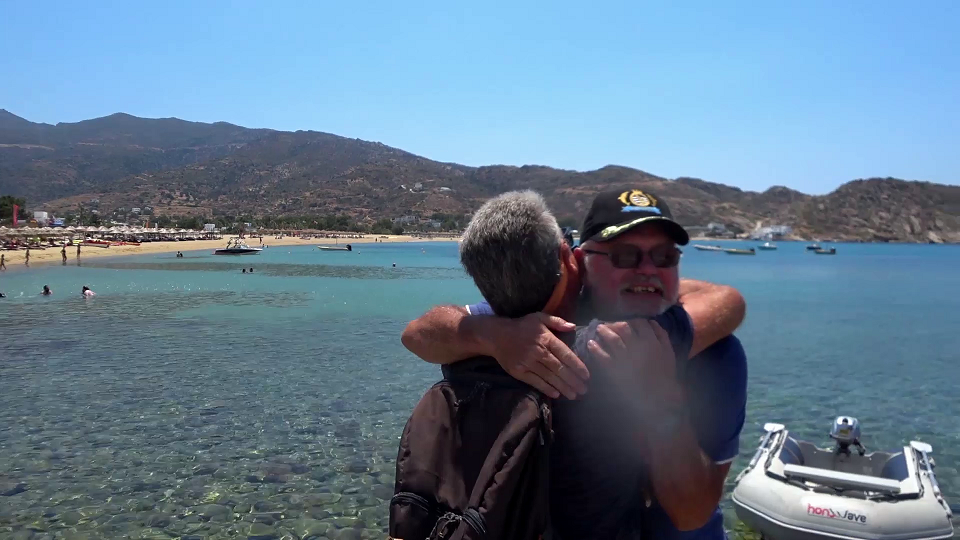 We headed to the main port with Jim (and his temporary crew member Eve who was on her way to another boat), and after asking around, were given directions to Jacobs Hardware & Chandlers 600m along the main road out of the port. There we managed to buy a replacement furling line and we also got a replacement for the mainsail inhaul line. It was also a relief to be able to swap out our empty cooking gas bottle for a full one, and armed with these we headed happily back to the boat.

Kolitzani bay was a pretty little anchorage and we enjoyed snorkelling around the rocks on either side of the bay. It was great catching up with Jim and as always when we were with him we had lots of laughs, some deep and meaningful conversations, and plenty of decent G&Ts!

One morning we were woken to a mystical misty low lying cloud that shrouded the hill surrounding the bay and rolled on over the sea, blanketing a nearby yacht. Quite beautiful.

Much to our dismay though our autopilot gave up the ghost one day accompanied by sounds of alarms coming from our chart plotter in the cockpit. The AIS and GPS had dropped out like a replay of the first fail in Kekova months earlier. Baz took the autopilot off line again and the AIS and GPS thankfully rebooted, but it looked as if the autopilot had failed again.

Fortunately for us, Jim was on his way to Marmaris in Turkey, which is where Nail at Na-To Marine Services had fixed the autopilot for us the first time. Jim offered to take it back to Nail and see if he could troubleshoot and fix the problem again.

So a couple of days later, Baz and I waved Jim goodbye as he left for Marmaris on Acheron, taking out autopilot with him. Would Nail be able to fix it? Was it being caused by faulty wiring or connections, or was it the autopilot itself?

Follow our journey next week as we travel from Ios to Milos, stopping at a couple of beautiful (but rolly) anchorages along the way.