There’s nothing like a ghost town to pique one’s interest. So when we heard about Kayaköy, the abandoned village near Fethiye, Baz and I decided that when we hired a car, we’d drive the 120Kms up from Kaş to explore it.

Kayaköy is nestled in the Taurus Mountains and we drove the final few kilometres through wooded hills, arriving at our destination about 2 hours after leaving A B Sea. Just driving into this large village whose roofless stone houses and bleak glassless windows gaped down at us from the hills was quite unsettling. Kayaköy’s chilling history immediately came to mind and was echoed in the bleak atmosphere that emanated from the empty homes.

You see, Kayaköy is not like other ruins you’ll visit if you go to Turkey. No.

These weathered remains have only been empty since the 1920s when its remaining 6,500 Christian inhabitants (who had coexisted peacefully for many hundreds of years with their Turkish Muslim neighbours) were forced to leave in a population exchange with Greece’s Muslims after the Greco-Turkish war of 1919-1922. There had already been three exile phases during 1916-1918, when whole families were force-marched to villages fifteen days trek away from their homes. During these marches, many of the elderly and children died along the route from hunger and fatigue.

Afterwards, the 18th century village of Livissi, built on the ancient 14th century Lycian site of Lebessus, was named Kayaköy, which means Rock Village. There are a few residents there now and some of the buildings are being restored. But if you’re anything like me, you wouldn’t be able to take one step in that village without recalling its distressing history.

Of course you can’t go anywhere in Turkey without being greeted by at least one friendly cat, and Kayaköy was no exception. This friendly puss had the loudest voice I’ve ever heard for a tiny feline, and despite my initial impressions of the village, the cat made me smile.

“Do you want to be our tour guide?” I asked it. “Meow,” it replied. As it didn’t venture further than the corner of the road where we’d parked our hire car, I figured it would rather get fed than be a guide.

Baz, being true to his Sagittarian star sign is an intrepid explorer and he immediately strode away from the car, Sony video camera in hand, in search of a starting point to our exploration. I walked alongside, skipping a few extra steps to keep up with his giant strides.

Surprisingly, the first area we came to was a small animal farm with a couple of dozen chickens scratching around in the dirt and one very large turkey peacefully picking its way around them. There was also a delightfully colourful peacock in a large caged enclosure, although it was also pecking around and didn’t seem too eager to show off its tail.

We returned to the main street that we’d driven down and looked up at the first row of houses towering over us from the hillside. Baz spotted a narrow track running up through the weeds and long grass and began hiking upwards. I tucked my phone/camera away down my bra so I had two hands to balance with; I didn’t want to fall again and break another wrist! As I picked my way up the stony track that was damp from the previous day’s rain, I wondered how on earth we were going to get back down without me turning the descent into a Mr Bean type episode.

Baz looked down at me – he has a nimbleness that mountain goats would envy – and I scowled at him as I scraped up the last few steps to where the first house shell stood. 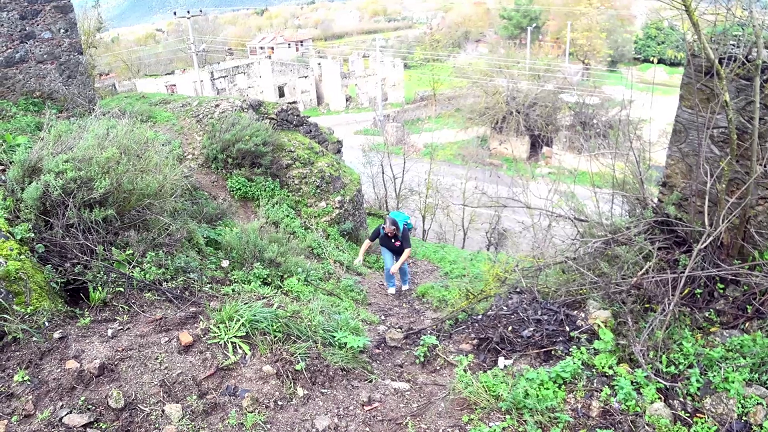 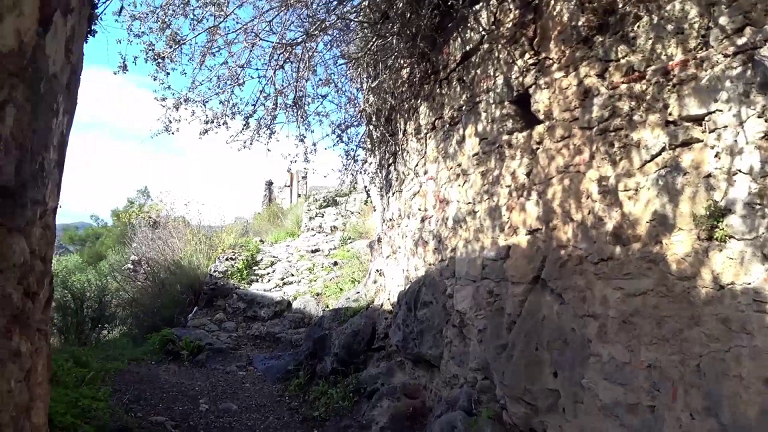 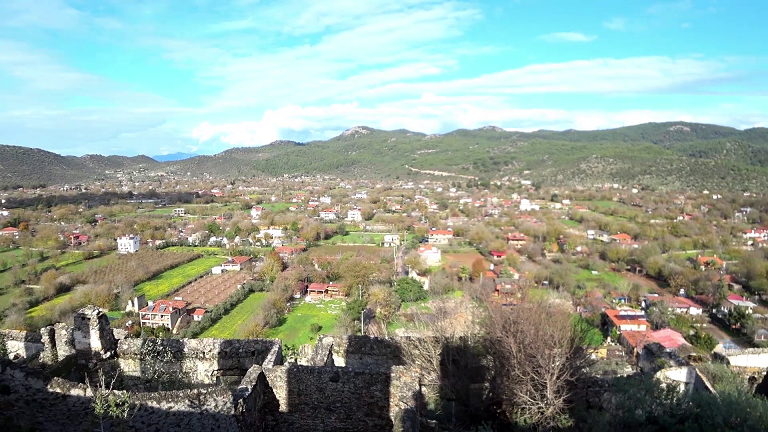 We both walked into the ruins and gaped in silence at what we saw. What had been two floors was now a shell of grey stone with crumbling plaster and evidence of a fireplace. The house had been built onto the hillside and actually had a large part of the rock face protruding into the lowest floor (or perhaps originally it would have been under the floor). A gnarly tree was growing through the stones and reaching upwards to the light.

Baz left me as I stopped to wonder about the former inhabitants. Had they been a young family? Or perhaps an elderly couple? How had they felt when they’d had to leave? Had they found another home easily?

“Keep going up!” Baz’s voice brought me out of my reverie and not a moment too soon. I followed his disappearing heels up the hill, around a few other house remains and upwards, until an old stone path led to what had once been a large building complex at the top of the hill. There was a tall flagpole with a Turkish flag flying proudly in the breeze, it’s red and white colours cheerful in the sunlight. 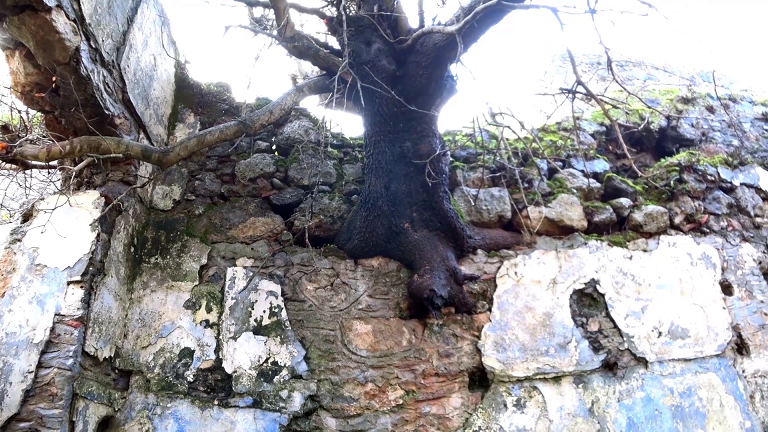 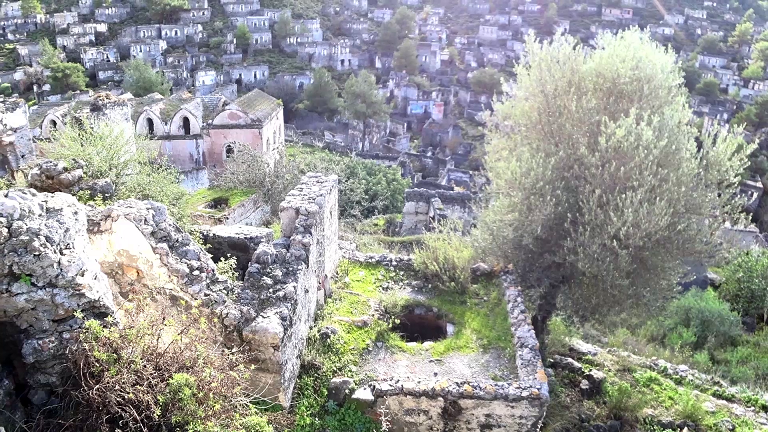 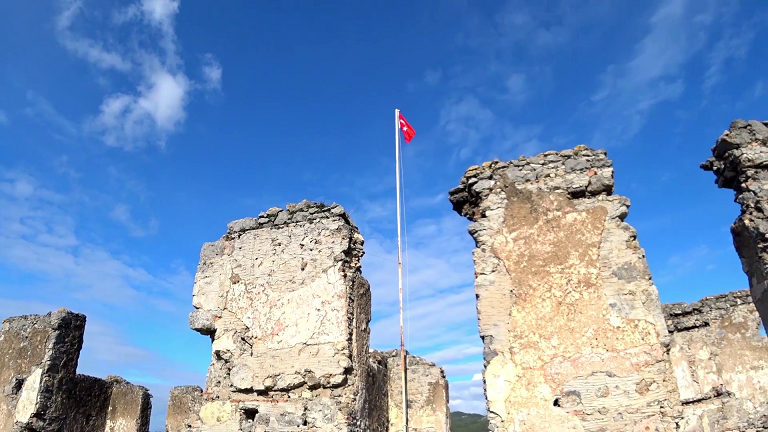 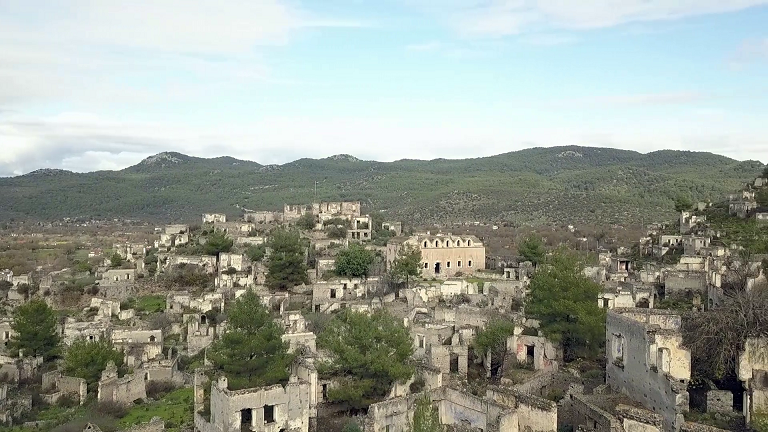 “Wow!” I said as I surveyed the scene laid out beneath me. Hundreds of run-down houses built on the hillsides, most with evidence of cisterns (to catch rain water) and none but the church topped off with roofs. Apparently the mud and wood roofs had collapsed in the years of weathering and a destructive earthquake.

We had lunch up there, with Red Admiral butterflies fluttering around us, and afterwards Baz flew the drone. The footage he captured was pretty amazing and you can see that in our YouTube episode “The GHOST town of Kayaköy - Sailing A B Sea (Ep.060)”.

I was glad that we went during off season winter months because the only other people we encountered were a young couple in the fort area, and a few people having a beer at the village bar/restaurant. With no-one else around it was possible to really seep up the atmosphere of this place, and do the memory of its people justice as we were able to stop and ponder their fate without the clamouring of lots of tourists.

We descended to the church that still had its roof intact but unfortunately it was in a walled area with a locked gate – presumably opened in summer. It would have been interesting to visit that building as it still has intact frescoes and vaulted ceilings that hark back to when the Christian population worshipped alongside Muslim friends in a respectful religious harmony. 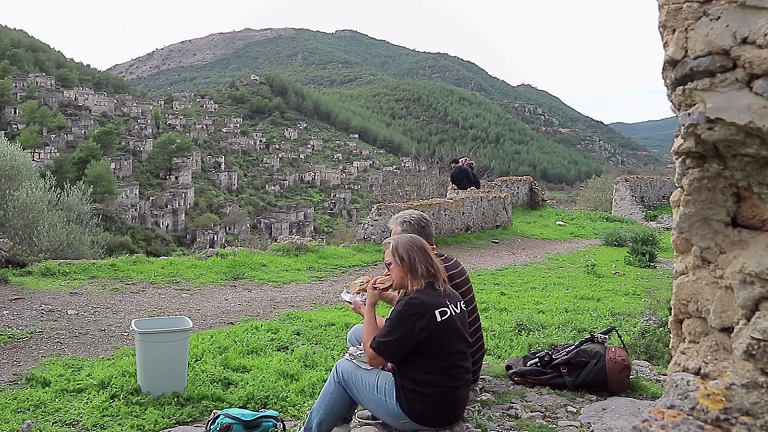 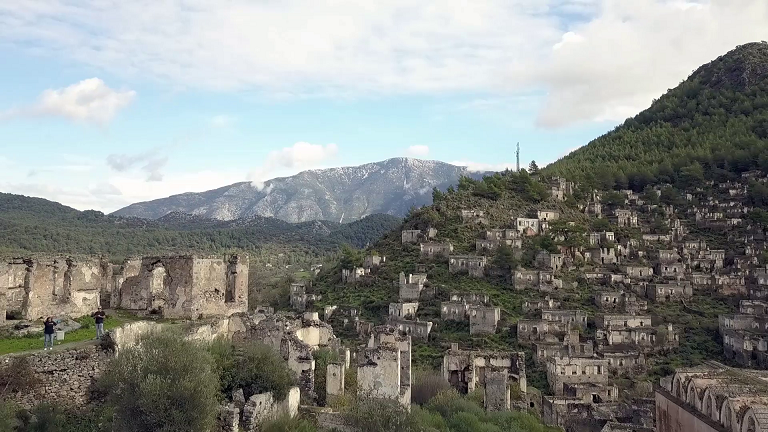 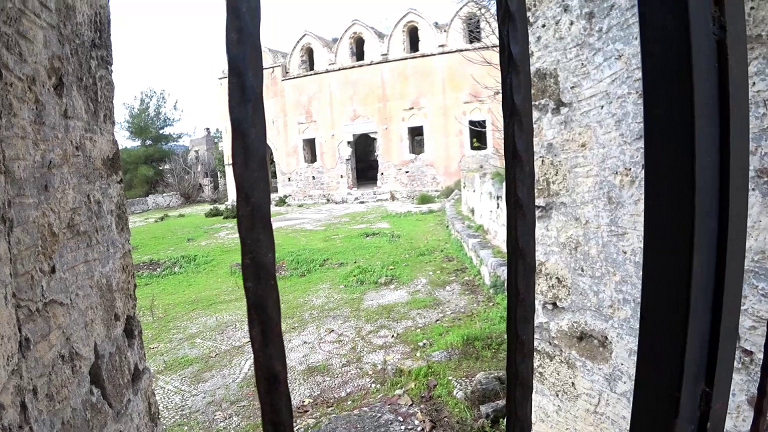 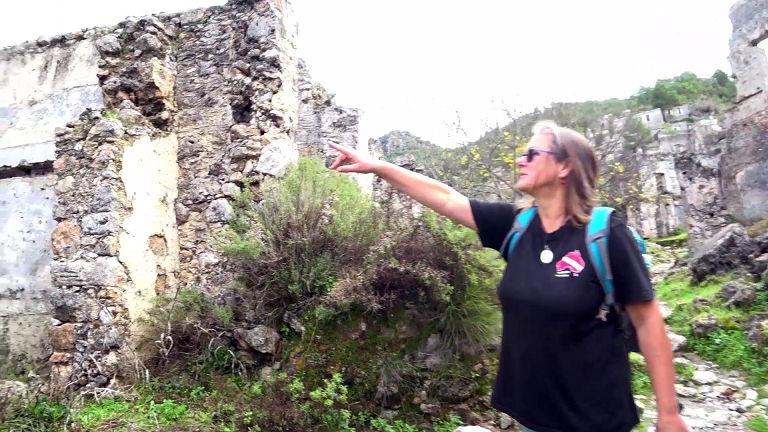 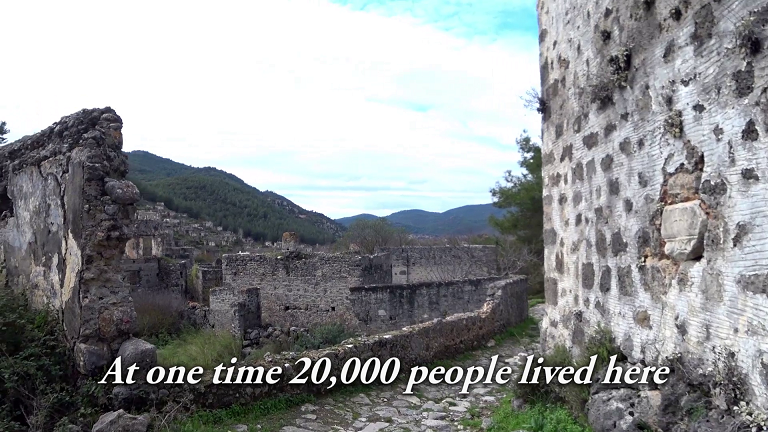 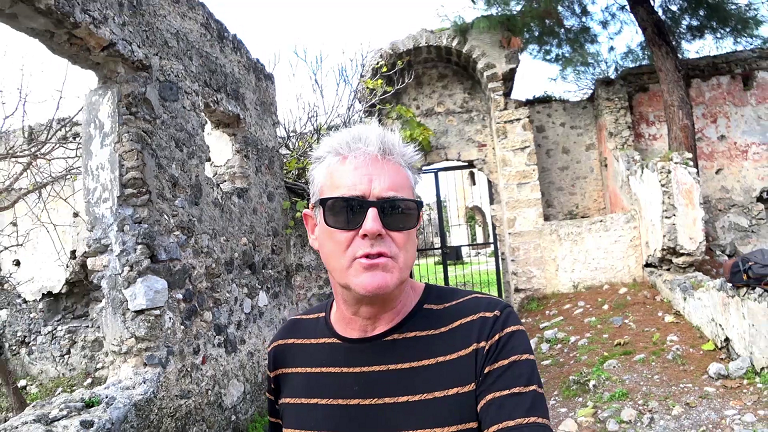 It’s about the individuals

When we descended to ground level and walked towards the bar, Baz asked me what my impressions were.

“Whatever reason the Powers That Be decided to make these people abandon their home must have been a good reason,” I surmised. “But it’s the individuals that I think of; the little old ladies and little old men, who may have only known this one place as their home – forced to leave and go somewhere strange. Perhaps the youngsters would have found it an opportunity for a new start in a new country, but not the old people.”

Comforting ourselves with beer (Baz), good coffee (me) and homemade cake in the rustic bar a little later, with the quiet conversation of others in the bar I asked Baz what he thought of Kayaköy. “It’s the little people who suffer,” he said. “Never the people at the top. It’s always the little people who pay the price.” 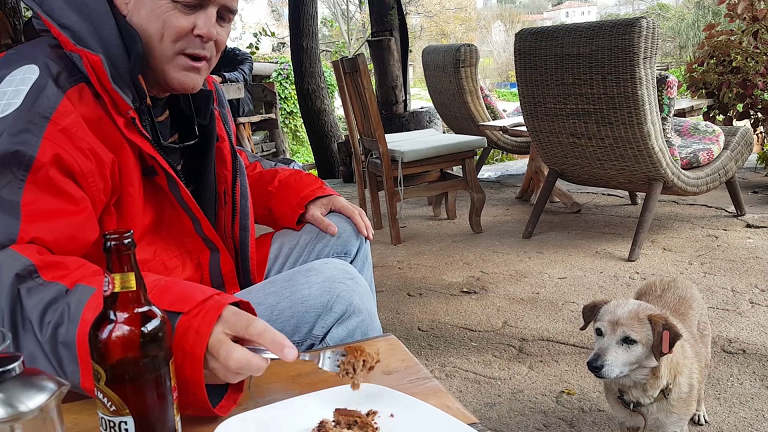 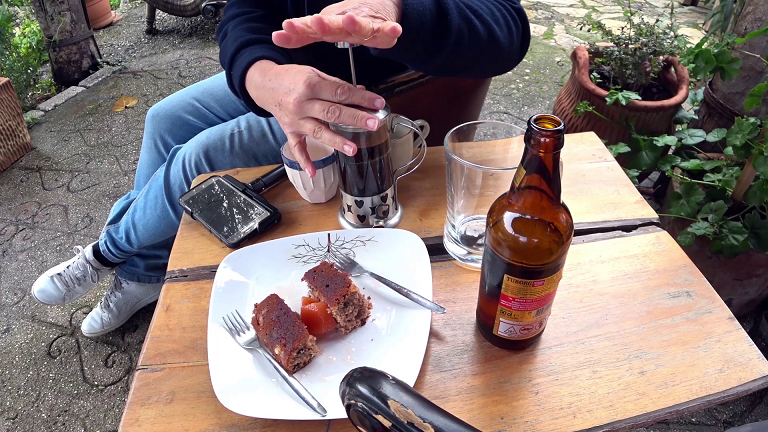 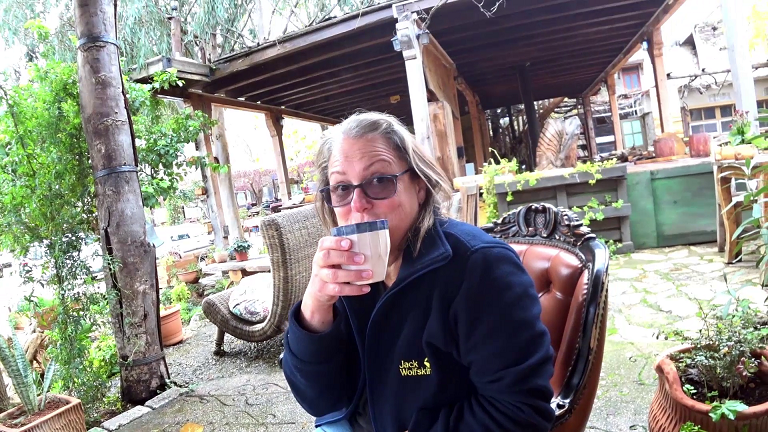 Despite its terribly sad recent history, Kayaköy and the older villages it was built upon were once thriving communities and it is heart-warming to see that some people live there now and offer hospitality, as well as renovating some of the buildings.