We had the hire car for the week and had already visited a few sites of interest, but when I woke up to a sunny morning and remembered where we were going, I literally jumped out of bed! (And those who know me well will know I’m not normally that eager to leave the comfort of my zed bed!)

I’d done some research the previous day and discovered that Yanartaş are eternal flames that burn directly out of the side of a rocky mountain above the village of Çıralı near Olimpos in Turkey which is just over a two hour drive from Kaş where we’re moored on A B Sea for winter. These flames which myth has explained as being fire from the breath of the mythical beast, the Chimera, are a natural phenomenon of burning methane gas. These flames have burned for thousands of years and in ancient days were used as a landmark by sailors who were passing by the coast.

The two hour drive became a three hour expedition when our usually trusty Sat Nav took us to a different Çıralı, tucked away in amongst small farming plots. Using sparse Turkish and lots of hand gestures, I managed to get new directions from one of the old farmers, who pointed south and I discerned that we had a way to go before reaching Olimpos. Not trusting Mrs Sat Nav, I turned on my phone and punched the destination into Google Maps, thanking the gods that I’d had the presence of mind to buy a Turkish sim for my phone a couple of weeks earlier. Google Maps pointed the way and we set off again in search of the Chimera – the beast with a goat’s body, a lion’s head and a snake tail.

Stocking up for the barbie!

Just before arriving, we stopped at a Migros supermarket and purchased some fresh bread (which you can get throughout Turkey for 1TL or AU$0.25 – one of Turkey’s policies to ensure even the poorest person can eat) and also some sausages. Two Aussies are not going to visit a flaming mountain without chucking a few snags on the barbie! Smiley had very kindly lent us two large metal skewers from his restaurant for our trip and armed with these, the food and a couple of beers, we set off on the final leg of our journey.

By the time we arrived it was already early afternoon and our tummies were rumbling. We parked in a large, relatively empty car park and made our way through a tourist shop to the little booth to get our tickets. The price was very reasonable coming to 7TL which is less than AU$2 each and that money goes to maintaining the footpath, toilets and bins.

The walk was a 3Km hike up a reasonably steep and often rough, stone path through pine trees. After about 40 minutes we saw a sign that said “flammable area” and five minutes later we arrived at our destination.

There are about a dozen or so flames that burn out of charred holes in the rock and even from a distance, you could see them burning. There were a few tourists sitting around most of the flames, so Baz and I took our time surveying the area. It was basically a large, gently sloping rock face on the mountainside, surrounded by trees and we could hear water running through a stream further down the mountain.

I was just wondering if we were going to get the chance to cook our sausages when a tour guide called to the tourists to return to their bus. One by one the flames became available until there was only one other family left. Baz and I now had the pick of the best fires and I chose a spot that had two flames, one large and one small that would give us different temperatures to cook our snags. Setting up camp beside the flames, I felt like a Stone Age woman – except my mammoth was snags and my bread wasn’t stone ground but shop bought. Still, it was very evocative!

A local cat decided we were a good food source and nearly stole one of the sausages as I was skewering it. Baz shouted ‘Oi!’ and, still in Stone Age woman mode, I growled at it. The cat realised it had to wait its turn and hung back, eying the sausages with hungry focus. 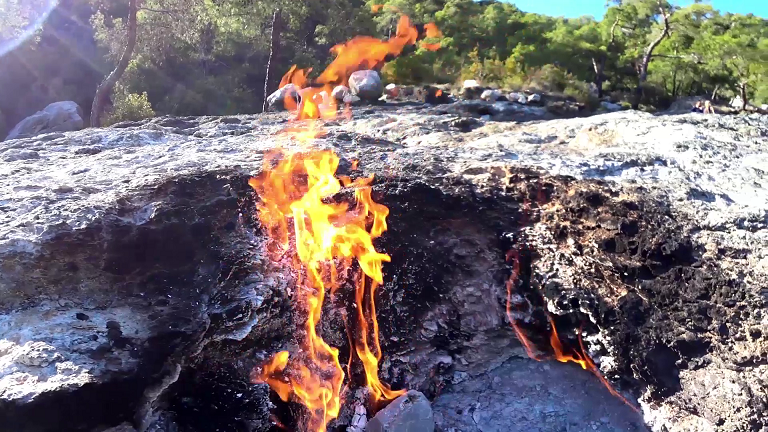 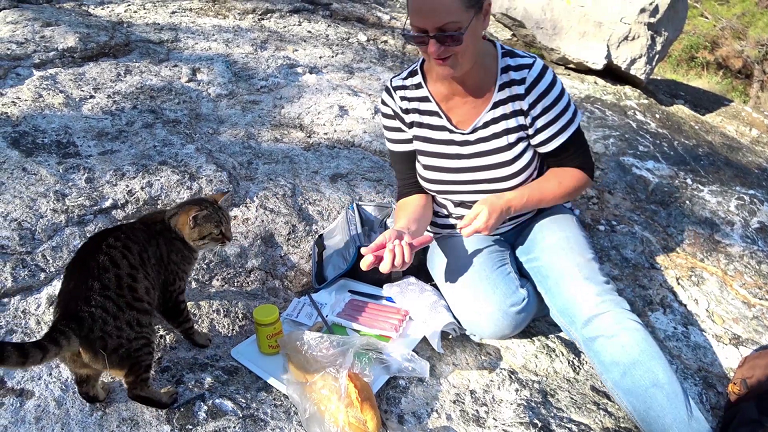 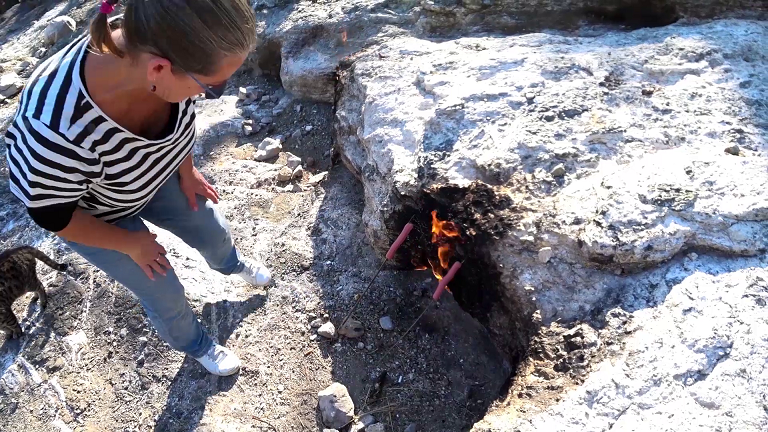 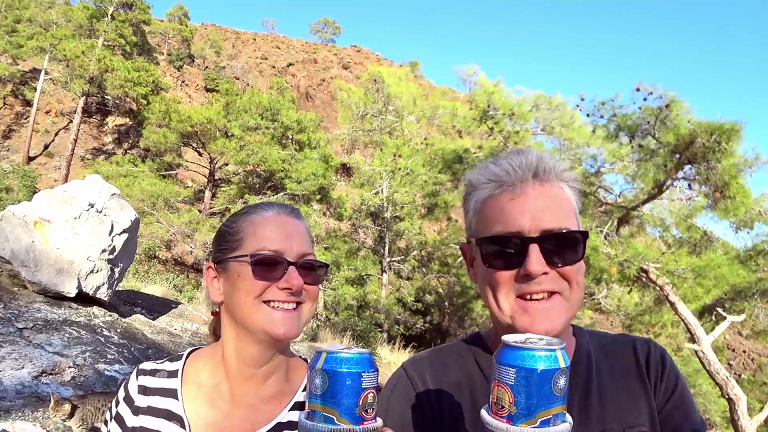 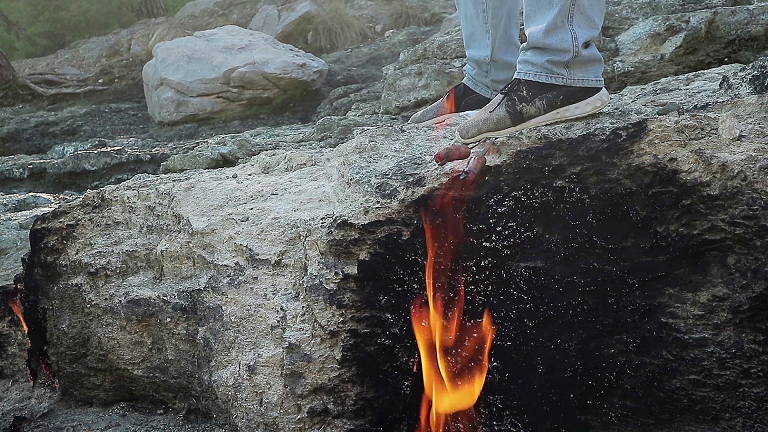 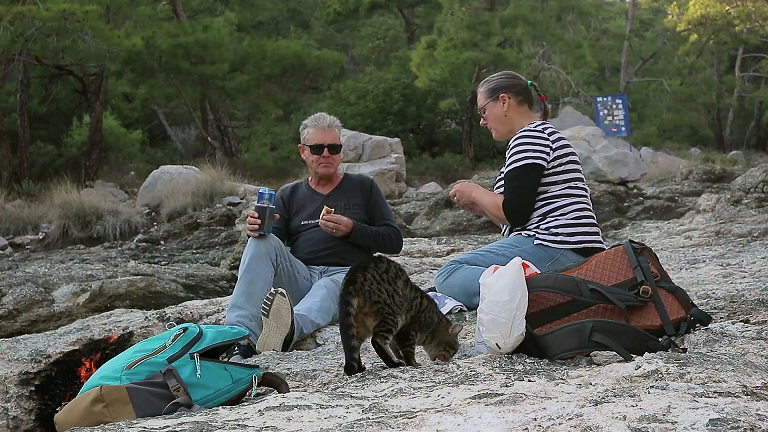 While we waited for the sausages to cook in the flames – and I still can’t believe how ‘cool’ it was to be able to do that!! – Baz and I cracked open a couple of beers and I cut and plastered English mustard on the bread. The cat took one sniff of the mustard and backed further away. While it wasn’t looking, I cut one snag into small pieces that I would give it while we were eating. Well, we’re not that mean! I kept the rest of the sausages handy in case one of Turkey’s larger mammals – boar, bear or wild cat – showed up. Baz asked me what I was doing and I told him.

“What, you’re going to throw them at the bear and hope it goes away?” he asked.

The final toasting of the snags required a bit of agility from Baz, who stood on the stone above the flame, securing the skewered meat over the flame. He did this while holding the Sony camera and his beer. He’d do any Aussie male proud.

Toe in the hole!

The cat, coming to check on whether the sausages were cooked or not, got in the way of the Canon that was on a gorilla tripod. When I was editing, I fell about laughing when Barry’s foot came into shot and, perfectly aligned with the cat’s bottom, gently pushed it away. That is definitely one of the highlights of tomorrow’s YouTube videos, as I just had to keep that footage in! (Pun intended).

After all three of us had eaten our fill of snags, we packed everything away and Mr Cat went on his way to find another meal among some people who had arrived before sunset which is when the flames really pop visually. Baz and I made our way down past the flames to some ruins of a Lycian temple and a Byzantine church. The architecture was incredible, with curved walls making a semicircle at one end of the temple, one building had been two stories and was still standing, and the main doorway was huge and built from massive carved stone blocks.

Two of the most amazing things about these particular ruins were that there was evidence of white plaster on some of the walls, and in a small dome at one end of the church, was the remains of a painting in red, white and grey. You’d think that after having seen several ruins in previous days we’d be tired of them, but each one has its own unique style and highlights that make it stand out. Coupled with the age of them, dating back at least 3,000 years, you can’t help but be in awe of the builders.

The walk back down the mountain didn’t seem to take as long as it had going up and we were followed by a kitten with a wonky eye, that purred to us all the way down. While Baz spent time filming the information board explaining the myth (and if you’re interested you can read about this in his blog), the kitten and I made friends. She really was a gorgeous thing and if Baz wasn’t allergic to cats I would have been very tempted to bring her back to the boat – despite everything I’ve said about not wanting a pet on board.

With a heavy heart, I said goodbye to kitty, who seemed to know we were leaving because she stopped following us as we made our way back to the car park, but instead, sat on the path watching us leave. I still have fond feelings for her when I think about that day. It’s funny how some animals can capture your heart so easily isn’t it?