Aannsha’s Blog #11 – Looking for a boat to call home

I really didn’t want to begin writing this blog.

In fact, I’ve been sitting at my laptop for 3 hours since 6.30am, fluffing around on the internet, editing photos, researching hash tag use, making cups of coffee; doing anything, rather than open up this particular can of worms that’s gnawing at my guts.

Because the first boat we saw, which on face value seemed to be in excellent condition and which we tentatively put an offer on, turned out to be a bit of a drama.

Actually it wasn’t the boat itself that was the issue. The boat, a 1995 45ft Jeanneau Sun Odyssey seemed to be everything we were looking for and the moment we stepped onto her in her marina at Mar Menor in Spain (about 3 hours drive south from where we’re staying) Barry and I both agreed we could live on her. She presented very well for a boat of her age (apart from a few minor issues) and had obviously been well looked after. The service crew were working on another boat next to her in the marina, and any time we asked the broker any questions, we literally got answers from the guys who had serviced her. The engine started first time and ticked over like a purring cat for the good half hour it was left running. We felt pretty confident that this was worth making an offer on, so we talked some more with the broker. 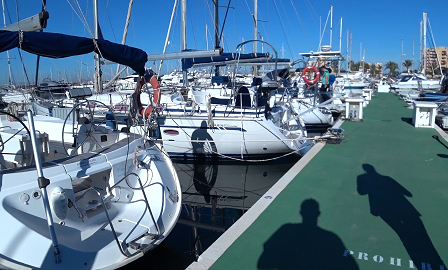 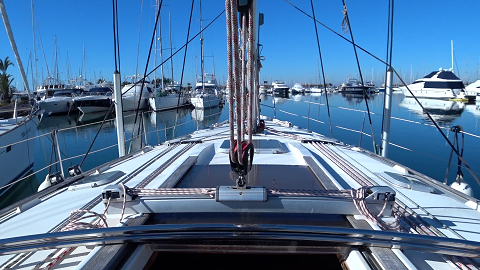 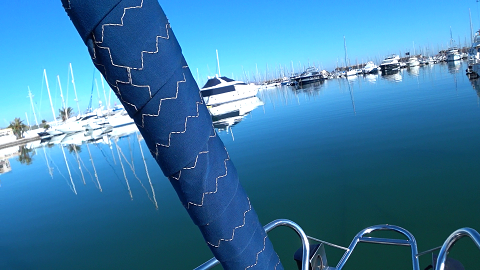 This is where things got iffy

I want to say outright, that the broker Jose, and his partner who translated Spanish to English for him, seemed to be very genuine, conscientious people, who worked very hard to gain a win-win outcome. The issue itself was with the owner of the boat.

We originally approached Jose from an advert we’d seen on www.yachtworld.com for a similar 45ft Sun Odyssey. When we asked the broker about that yacht, he told us it had been sold but the owner hadn’t taken the advert down. We explained what we were looking for and would like to see boats of different sizes to get an idea of what would be best for us. He offered to show us a similar yacht to the one advertised although it wasn’t technically for sale at the moment, but was in the marina at Mar Menor near to where he had his office.

We were quite excited as this was going to be the beginning of our proper search for yachts – actually getting on them and getting a feel for them. We went to the marina and Jose and his partner were there, and we had plenty of time to get a feel for that particular yacht. Apparently, the owner was having a new Hanse boat built and wanted to sell this Jeanneau in order to pay for the extras that he wanted included on his new yacht. We liked the boat that much that we were very interested in finding out more about it and when it would be for sale, as we would be interested in looking at it again once we came back from our sailing course in Gibraltar.

From here on, there was a lot of back and forth communication between us, Jose and the lawyer owner, and while I empathise for Jose being in the middle of this scenario, I do not appreciate how the owner put pressure on us from the beginning and basically kept ‘taking’ from the boat without giving us any leeway for negotiation at all. In a nutshell here’s what happened (if you want the detailed account, Barry has outlined it very clearly in his blog #13):

We asked if the yacht would be for sale at some time as we would be interested in returning to see it at the end of February. The owner said it wasn’t for sale as he didn’t want to be without a yacht for the upcoming sailing season.

Then he said he would consider selling if we bought it that week. His reason? In order for him to get his new Hanse in time for the summer sailing season, the specs had to be paid for within the week so that all extras could be included during the build. We said “fair enough” but didn’t like that we had a very short time to consider the purchase, and organise a haul out and survey.

After a serious chat, Baz and I decided that this yacht did have all the comforts of home that we were looking for and despite it not having other requirements such as solar panels, it had enough inclusions such as a bow thruster, that if we paid a reasonable low price, we would be able to get the rest added.

One of the issues was we didn’t know what price the owner wanted. He’d agreed to us seeing the boat in the first place as we’d said we were looking for a vessel within a price range of 75,000-85,000 Euros. We asked the broker to ask the owner what price he was looking for. Jose came back by asking us what we’d offer. We said given it was an older boat and didn’t have a lot of extras, and after months of carefully researching boat prices on the internet (you know how Barry likes to gather useful information), we would offer 75,000 Euros. The broker got back to us (we were back in Javea at this point) and said that the owner was prepared to sell if we would act quickly, but that he was now taking out bedding, kitchen utensils, the tender with its engine, tools: basically leaving us with the bare boat, the sails, and “everything required to sail a yacht” – whatever that was.

Well, that made my guts twang, but I was able to justify that by thinking he may want it for his new boat. Although personally, if I were having a new boat built with custom specs, especially a different model by a different manufacturer, I’d buy new bedding, tools and extras to fit it. This also meant, we were now potentially paying 75,000 Euros for less and would have to add on the cost of kitting it out on top of the other necessities we’d already discussed. Baz definitely didn’t like it and felt the owner was jerking us around by putting pressure to buy within a week and now taking stuff away from the deal. I felt the same, but we did want to act quickly and this boat was still acceptable, even though the owner’s demands were beginning to sour the deal.

There were several pressing reasons for us choosing to offer on this boat so quickly:

The boat that we’d decided was right for us was becoming less attractive for the price we’d considered. Yes, it was in good condition and yes, one of the reasons for our considering buying this very first yacht that we’d stepped onto was that there seemed to be a scarcity of yachts in Spain – well the whole Mediterranean – of the size and type of boat we were looking for. This Sun Odyssey had originally looked ideal as it meant we could move straight onto it (with necessary additions that we were prepared to make and had budgeted in by offering the 75,000 Euros) and we would be living in our own place.

Given all of this and despite Mr Boat Owner pretty much gutting it inside, we still decided to go ahead. We sent a 10% deposit and asked Jose to arrange for haul out and inspection. We weren’t happy that we’d have to buy a new tender and outboard; bedding (boat bed shaped – how much would that cost?), kitchen utensils, pans, crockery and cutlery; tools and other incidentals – but we figured we could probably manage it all for 10,000 Euros which we would still have in our budget after paying for the boat.

On the morning of the day before we were due to go down to Mar Menor for the haul out and survey, we got a surprising email from Jose. Basically it said that the owner was now not prepared to sell for anything less than 80,000 Euros but that he was prepared to throw in a tender (but no outboard).

That felt like an insult and was basically the final straw for Barry and me. I won’t share the expletives that exploded out of us that day, but after we’d calmed down Baz said he was fed up of that @#*# jerking us around and he wasn’t prepared to go ahead with the purchase. My first thought had been that if we did go ahead with the purchase, we’d want a complete list of inclusions in writing and a photograph and full details of the tender that was going to be thrown in, as I didn’t trust that Mr Boat Owner would include the same tender that we’d seen on our inspection.

At that point I agreed with Baz that I was happy for us to pull out of our original offer that was now being rejected. That meant at the final hour the poor broker was going to have to cancel the haul out and surveyor. I honestly didn’t think we’d ever get to enjoy living on the boat if we’d purchased it after succumbing to all of the owner’s demands. I’d never liked the feel of his energy from the start.

We are both putting that down as a learning curve.

What have we gained from this?

A bit of buyer’s wisdom. Don’t be pressured to making an instant decision. Listen to your gut instincts (which Barry and I usually do). Get everything in writing up front.

We also decided to open up our search for yachts to include other manufacturers and models that we’d previously discounted. Since doing that, we’ve discovered a handful of other boats, two of which are within a two hour’s drive from Javea. We’re seeing one today, and hopefully the other one tomorrow.

After that, we’re driving to Gibraltar on Friday for our intensive sailing course and even if we do like either of these boats, I’m pretty sure we won’t be buying them on the spot! Our search for boats is still on, and I feel a renewed sense of enthusiasm and optimism that our boat is out there waiting for us to find it.

And of course, the moment we find our new home, you will be the first to know.

Link to Aannsha's next blog